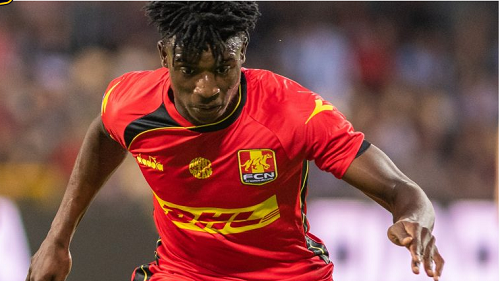 FC Nordsjaelland midfielderÂ Kudus Mohammed has opened up on his debut call-up to the senior national team, the Black Stars.

The midfielder has been handed an invite to the national team following his form in the Danish top-flight where he has scored four times in 10 appearances this season.

He is among the seven new faces that Kwesi Appiah has drafted to the team as Ghana prepares to take on South Africa andÂ SÃ£o TomÃ© and PrÃ­ncipe on November 14 and 18 respectively for the AFCON 2021 qualifiers.

READ ALSO:Â I'm the best goalkeeper in the squad - Abalora after earning Black Stars call up

Opening up on maiden call-up, the Right to Dream attacker said he is happy about the invite but there is more work to be done to nail a spot in the team.

"My coach Flemming Pedersen told me [yesterday] after training, and I just thought "wow!".

"It's good news but I also believe it's just the beginning and now I need to work even harder.

"I knew the national coach had been here in FCN [FC Nordsjaelland] to visit and that there was a chance this could happen.

"This is one of the biggest things that can happen, and it has come early. It's a good step for me but it's just the beginning."

FC Nordsjaelland coach Flemming Pederson says he feels proud he has had a hand in Kudus maiden Black Stars call-up.

â€œThis is very good news for the club as well. That we can also develop players for the national team in Ghana. It's a huge achievement for us and especially for Kudus. It means a lot.â€

Kudus Mohammed was part of the Black Satellites team that exitedÂ Total U-20 Africa Cup of Nations in Niger, early this year.