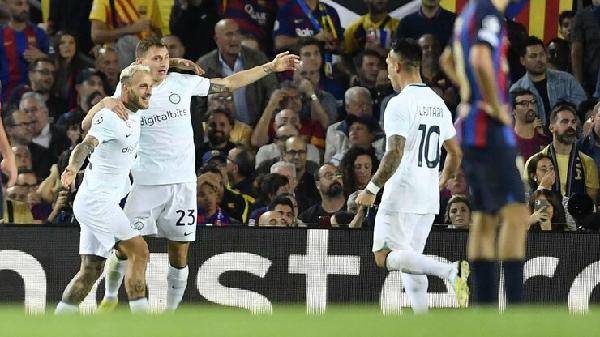 Barcelona’s hopes of contesting the Champions League knockout stages hang by a thread after a 3-3 draw with Inter at Camp Nou.

Barca came into this match well aware that only victory would do, given that they found themselves third in Group C, three points behind their opponents in second, after three games. With Inter triumphing 1-0 at San Siro last week, giving themselves an advantage on head-to-head, a win for the visitors would cut short Barca’s Champions League campaign.

The match took on a familiar pattern from the start, Barca dominating the ball and trying to break down their opponents. Inter, meanwhile, tried to hit their hosts on the counter-attack and force them into mistakes in possession.

The visitors required a clearance off the line from Henrikh Mkhitaryan to deny Robert Lewandowski at a corner early on but, with a little over a quarter of an hour gone, they were left to wonder how they hadn’t gone ahead. An inch-perfect free-kick delivery from Hakan Calhanoglu fell perfectly for Edin Dzeko, who thundered a shot onto the underside of the crossbar only for it to ricochet down onto the line and bounce away.

Mkhitaryan and Ousmane Dembele forced saves from Marc-Andre ter Stegen and Andre Onana respectively before Inter went close once again. Nicolo Barella beat Gavi to a header in midfield and, suddenly, the Nerazzurri had a three-on-two which ended with Denzel Dumfries firing straight at Ter Stegen.

Barca’s patient build-up play began to pay dividends, however, with Onana fumbling a shot from Sergi Roberto before keeping out Lewandowski on the follow-up. Raphinha and Pedri both went close before, on the 40-minute mark, Dembele broke the deadlock, capitalising on good build-up play from Raphinha and Roberto – and uncharacteristically sleepy defending from Inter – to smash into the net from five yards.

Inter hit back five minutes after the restart after a horrible defensive mistake from Gerard Pique, who left a dangerous delivery from Alessandro Bastoni for Ter Stegen to deal with only for Barella to ghost in behind him and score.

The home crowd went deathly silent when, with 63 minutes on the clock, Calhanoglu picked out Lautaro Martinez on the edge of the area and he pinged one in off the inside of the post.

Lewandowski gave Barca hope with 10 minutes to go. Bastoni failed to clear his initial header, allowing Barca’s top scorer to gather up the ball and leather it past Onana.

Barca pressed hard for a winner, too hard as it turned out. Martinez got in behind on the counter and put through Robin Gosens, with the substitute firing past Ter Stegen.

Just when it looked like the hosts’ Champions League adventure was over, Lewandowski popped up again in injury time to make it 3-3. Barca couldn’t find a fourth goal, however, and with Inter up against Viktoria Plzen next time out this may turn out to be little more than a stay of execution for the Blaugrana.