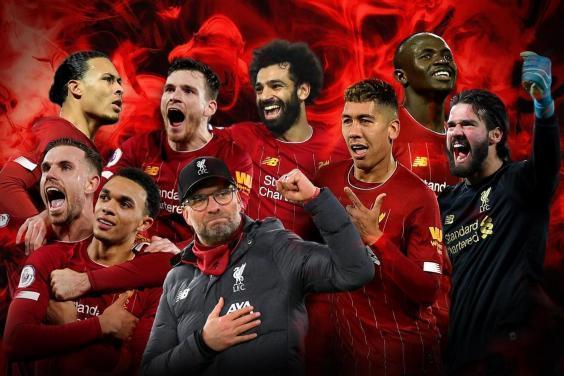 Liverpool have ended their long wait to be crowned Premier League champions after Manchester City's 2-1 loss at Chelsea left them with an unassailable lead.

The Reds' first league title since 1990 was confirmed on Thursday, after Pep Guardiola's side failed to win at Stamford Bridge.

Christian Pulisic's goal had given Chelsea to lead before a wonderful Kevin De Bruyne sparked hopes of a comeback, but Fernandinho's late red card led to a coolly converted penalty to win the game - and gift Liverpool league glory.

With seven games remaining, it is the earliest any side has ever won the Premier League title, with Jurgen Klopp's men surpassing the achievements of Manchester United in 2000-01 and Manchester City's 'centurions' of 2017-18. Both of those teams clinched the league with five games left.

Liverpool had moved to the brink of the title with a 4-0 battering of Crystal Palace at Anfield on Wednesday, and their lead of 23 points at the top of the table is the largest held by a champion in English top-flight history.

Klopp's side will now look to write even more history. They need 15 points from their last seven matches to set a new record points total for a top-flight campaign, and can also become the first team to win every single home game in a single season.

They will be given a guard of honour in their next fixture, which coincidentally comes against City at the Etihad Stadium next Thursday. Guardiola's side, champions in each of the last two seasons, have been unable to match Liverpool's remarkable, relentless form.

The tone was set from the very start, Klopp's side winning each of their opening eight league games to open up a significant gap on the chasing pack.

That run ended with a draw at Manchester United in October, but they responded to that setback in incredible fashion, winning their next 18 league games - including a 3-1 victory over City in November and a comprehensive 4-0 thrashing of second-placed Leicester on Boxing Day.

When they won 2-0 at West Ham on January 29, Liverpool had achieved another piece of history. For the first time ever, they had beaten each and every team in a top-flight league season. Their superiority was unarguable.

At that point, the hope was that they could match Arsenal's 'Invincibles' of 2003-04 and go through the entire league campaign unbeaten, but a shock 3-0 loss to Watford in late February put paid to that.

Then came the ultimate spanner in the works, with the Premier League's suspension in mid-March due to the coronavirus crisis. Liverpool were 25 points clear at the pause, needing just six more in order to be crowned champions.

But they were made to wait as the world came to terms with the impact of Covid-19. Despite calls in some quarters to "null and void" the Premier League season, Klopp and his side were able to retain their focus throughout a period of lockdown, eventually returning to action last Sunday with a low-key goalless draw at Everton.

That led some to question, absurdly, whether they might be starting to wobble in sight of the finishing line, but they responded in fine style on Wednesday, thrashing Palace in what may well be their most convincing home performance of the entire season.