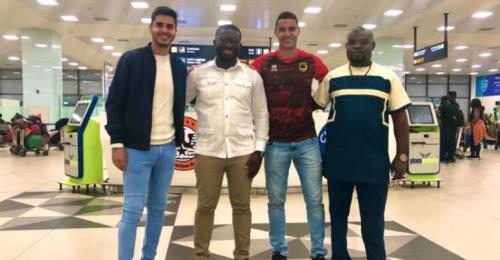 The 27-year-old landed at the Kotoka International Airport on Friday afternoon.

He was welcomed by the Chief Executive Officer of the club, Nana Yaw Amponsah and Supporters Chief, Christopher Damenya.

Kotoko two weeks ago announced that they have secured the signature of Michael VinÃ­cius Silva de Morais.

The Brazilian put-pen-to-paper to join the Porcupine Warriors on a two-and-a-half-year deal. He is expected to fill the role vacated by Kwame Opoku who has left Kotoko to join Algerian side USM Alger.

Michael VinÃ­cius Silva de Morais is the secondÂ Brazilian to play for Kotoko this season after Fabio Gama Dos Santos.

Asante Kotoko finishedÂ  4th position on the league with 27 points in the first round of the Ghana Premier League.

Meanwhile, Kotoko have also confirmed Portuguese manager, Mariano Barreto as their new manager on a one and half year deal.

The former Black Stars coach has joined the Porcupine Warriors on Â on a renewable one-and-a-half contract.