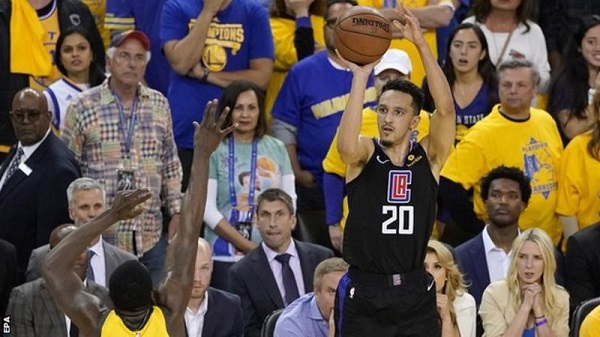 The eighth seeds rallied from 31 points down in the second half to beat the defending champions, with shooting guard Lou Williams scoring 36 points.

It beats the 29-point recovery the Los Angeles Lakers managed against the Seattle Supersonics in 1989.

The best-of-seven Western Conference first-round series is now tied at 1-1.

The Warriors led 73-50 at half-time before a flurry from star point guard Stephen Curry, who hit 29 points, put the hosts 94-63 ahead in the third quarter in Oakland.

Williams hit a jump shot over Klay Thompson to bring his side within a point and, after Thompson missed a three-point attempt, Landry Shamet converted one of his own to put the Clippers two points up with 16.5 seconds remaining.

Warriors centre DeMarcus Cousins, who returned this season after a year out with a torn Achilles, suffered a quad injury in the first quarter.

Coach Steve Kerr described the injury as "significant" and said Cousins is "going to be out for a while".

The third match of the series is in Los Angeles on Thursday.

Elsewhere, the Philadelphia 76ers secured a dominant 145-123 victory over the Brooklyn Nets to level their Eastern Conference first-round series at 1-1.

Game three is on Thursday in New York.