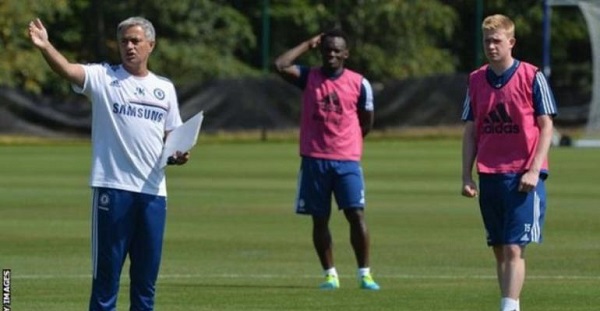 Belgium midfielder Kevin De Bruyne says he only spoke to former manager Jose Mourinho twice during his time at Chelsea.

De Bruyne, now at Manchester City, made only three Premier League appearances in two years at Chelsea, spending a season on loan at Werder Bremen.

"There was so much in the press about my relationship with Jose Mourinho," De Bruyne, 27, told the Players' Tribune.

"But the truth is that I only ever spoke to him twice. The plan was always for me to go on loan for a bit."

De Bruyne scored 10 goals in 33 Bundesliga appearances for Werder Bremen before returning to Stamford Bridge, when the then Borussia Dortmund manager Jurgen Klopp - now in charge of City's title rivals Liverpool - wanted to sign him.

De Bruyne said: "Mourinho texted me, 'You are staying. I want you to be part of this team'.

'I'd rather you sell me' - on leaving Chelsea

De Bruyne started two of the first four league games of the 2013-14 season, but soon fell out of favour with Mourinho and was dropped to the bench.

"Jose called me into his office in December, and it was probably the second big life-changing moment for me. He had some papers in front of him, and he said, 'One assist. Zero goals. Ten recoveries'," De Bruyne said.

"It took me a minute to understand what he was doing. Then he started reading the stats of the other attacking forwards - Willian, Oscar, Mata, Schürrle. And it's like - five goals, 10 assists, whatever.

"Jose was just kind of waiting for me to say something, and finally I said, 'But… some of these guys have played 15, 20 games. I've only played three. So it's going to be different, no?'

"It was so strange. I was completely honest. I said, 'I feel like the club doesn't really want me here. I want to play football. I'd rather you sell me.'"

He scored 13 goals in 51 league appearances before becoming City's record signing in 2015 when he agreed a £55m, six-year deal.

'You threw me in the garbage' - on making a point

As a 14-year-old, he joined Genk's academy, moving away from his family across Belgium.

In his second year at the academy, he lived with a foster family, provided by the club, but after a season they said they did not want him back.

"It's because of who you are," De Bruyne's mother told him. "They said you're too quiet. They can't interact with you. They said you were difficult."

De Bruyne said: "I kicked the ball against the fence for hours, and I remember at some point I actually said out loud, 'Everything is going to be OK. In two months, I'm going to be in the first team. No matter what, I am not coming back home a failure.'"

The following season, he was promoted to Genk's second team, for whom he scored five goals in one half of a game.

"You could see the change in everybody around the club. I earned a spot on the first team within two months," De Bruyne said.

"It's funny to see the change in how people treat you in football when you're doing well."

His foster family turned up at the club saying they wanted him back.

"They had really hurt me. So I said, 'No. You threw me in the garbage. Now I'm doing well and you want me back?'" De Bruyne said.

"In the end, I should have just said 'thank you'. That experience was the fuel for my career. But, unfortunately, that cloud still followed me around for a long time."