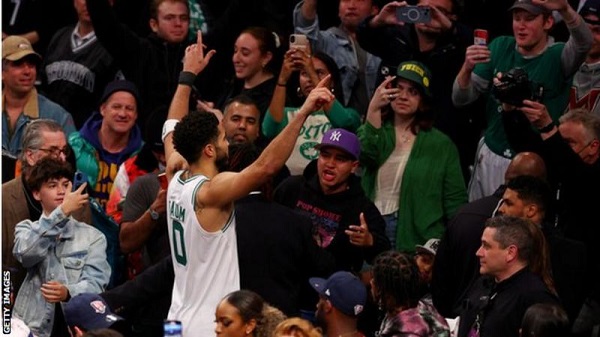 The Boston Celtics completed a 4-0 sweep over the Brooklyn Nets to book their place in the Eastern Conference semi-finals.

The second-seeded Celtics never trailed in a 116-112 victory in New York, as Jayson Tatum led with 29 points.

Jaylen Brown added 22 points while the Nets' Kevin Durant made 39 for his best game of the series.

"We knew who we were facing, we knew how talented they were, we knew it was going to be a dog fight," said Tatum.

"It was 4-0 but each game was back and forth and tough. We just believed in ourselves. We took it one game at a time and didn't get too far ahead of ourselves."

The Celtics await the winner of the series between the Milwaukee Bucks and the Chicago Bulls. The Bucks lead 3-1.

Elsewhere, the Toronto Raptors once again held off elimination with a 103-88 win over the Philadelphia 76ers, who lead the series 3-2.

Pascal Siakam scored 23 points, adding 10 rebounds and seven assists, as the Raptors continued their comeback with a second successive victory.

Should they go on to win, the Raptors will become the first team in NBA history to overcome a 3-0 series deficit.

In the Western Conference, the Dallas Mavericks took a 3-2 lead over the Utah Jazz with a 102-77 win in game five.

The Mavericks were on top throughout, leading at one point by 33 points, as Luka Doncic scored 33 himself and grabbed 13 rebounds.