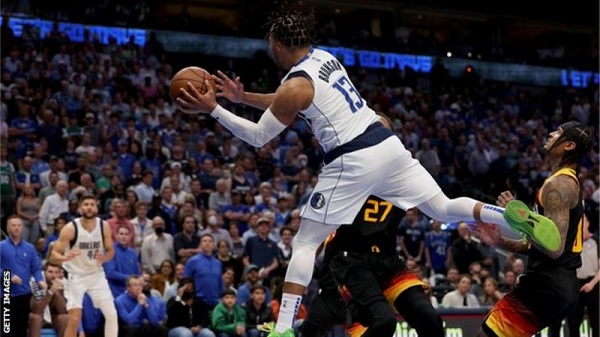 Brunson is enjoying the best season of his NBA career
Shares

In the absence of injured star Luka Doncic, German Maxi Kleber added 25 points off the bench for a 110-104 win in the best-of-seven series.

And Golden State beat Denver 126-106 to lead their series by the same score.

Brunson kick-started a 10-0 Dallas run to put the Mavs 96-93 ahead with five minutes and 40 seconds remaining in Texas.

Although Utah scored the next five points, Kleber made back-to-back three-pointers for a 102-98 Dallas lead and the Jazz never matched them again.

The Mavericks made a team-record 22 three-pointers but committed only three turnovers, tying an NBA play-off record.

"We needed this win," Brunson said. "I just tried to go out there and have fun. I'm just being aggressive, trying to make plays, trying to engage multiple people, trying to create problems. Just playing my game.

"We've just got to keep playing together, no matter what. We're just taking one game at a time. This was great, but we've got to look forward."

In San Francisco, Golden State finished the second quarter on a 26-8 run over the last seven minutes for a 57-51 half-time lead.

They took control in the third quarter, leading 101-81 entering the fourth, and cruised to victory.

All-Star guard Stephen Curry, coming off the bench in his second game back from a foot injury, scored 34 points while Jordan Poole had 29 points and Klay Thompson 21.

The 2022 NBA MVP finalist suffered a right elbow injury late in the third quarter but played to the finish.

"It was pretty sore," he said. "But it's the play-offs. Got to fight through it."