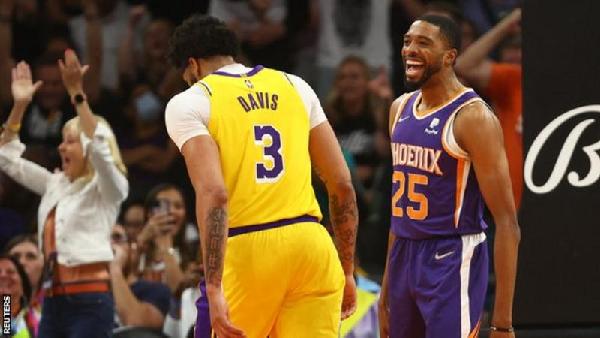 The Los Angeles Lakers have missed out on a place in the NBA playoffs after suffering a seventh-straight defeat in losing to the Phoenix Suns.

The Lakers, again without the injured Lebron James, were beaten 121-110 by the Western Conference leaders.

It is just the fourth time in James' 19-year career that he has failed to make the NBA post-season.

"We wanted to play our part in bringing success to Lakers basketball and we fell short," said coach Frank Vogel.

"It's not been due to a lack of effort. We have all put in the work. Guys stayed fighting right to the end.

"We brought integrity to the process we just fell short through a disjointed season. We're all disappointed."

Two teams from each division can then secure a place in the end-of-season play-offs via the play-ins route.

The Lakers had to win to stand any chance of extending their season after the San Antonio Spurs beat 116-97 the Denver Nuggets earlier in the evening.

The Utah Jazz beat the Memphis Grizzlies 121-115 after overtime in Salt Lake City. The Jazz's win combined with the Minnesota Timberwolves' 132-114 defeat to the Washington Wizards means Utah are guaranteed to be no worse than the sixth seed in the Western Conference playoffs.

The Milwaukee Bucks are now tied for second behind Miami after a 127-106 victory against the Chicago Bulls. Despite the defeat, the Bulls secured their first playoff berth in five seasons after the Cleveland Cavaliers lost 120-115 against the Orlando Magic.