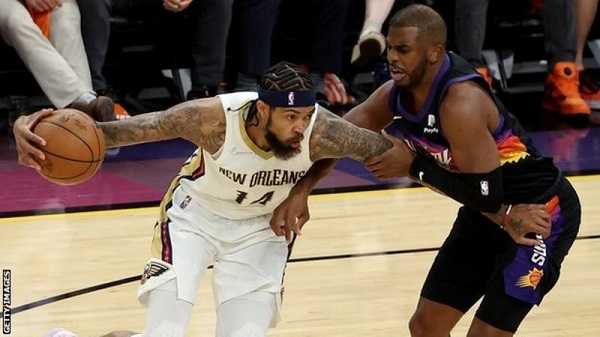 The New Orleans Pelicans beat the top-seeded Phoenix Suns 125-114 to level their NBA playoff series at 1-1.

The third game of the best-of-seven Western Conference series takes place on Friday in New Orleans.

Booker scored 16 points in the first quarter for the Suns, but left the court after jumping to contest a shot.

He returned at the start of the fourth quarter, but did not resume playing.

The 25-year-old Booker missed seven games earlier this season with a left hamstring problem and will be assessed further.

Suns coach Monty Williams said: "If we have to play without Book, next man up. We've done that all year long."

Elsewhere in Tuesday's play-offs, the Miami Heat took a 2-0 lead over the Atlanta Hawks with a 115-105 win.

"I just always want to play basketball the right way and do whatever it takes to help this team win," Butler said.

The Memphis Grizzlies registered a dominant 124-96 over the Minnesota Timberwolves to level the series 1-1.

Ja Morant had 23 points and 10 assists, while Desmond Bane and Jaren Jackson Jr scored 16 points each, for the Grizzlies. Anthony Edwards led the Timberwolves with 20 points.