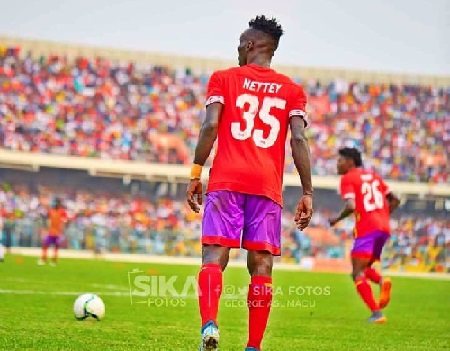 Hearts of Oak midfielder Emmanuel Nettey says the bolstering of the squad is a step in the right direction in the club's quest to win laurels.

The Phobians were 9th on the league log with 21 points when the Ghana Premier League was called off due to COVID-19.

According to the former Inter Allies midfielder the new recruits have the potential to help the club reach its targets. The Accra based club have struggled to annex the Ghana Premier League since annexing it in 2009.

"Hearts of Oak is one big family, I'm happy to have joined, the new colleagues that joined ... Abednego Tetteh is one person that I'm close to so we have interaction, we train and play together but unlike the foreign who joined I really didn't have any personal interaction with them. But seeing them at training and with the kind of quality they have, I think they are really going help us annex laurels."

Emmanuel Nettey who starred for Hearts of Oak in the null and void 2019 Ghana Premier League campaign has expressed disappointment at the decision by the GFA to cancel the 2019/20 Premier League season.

The midfielder who joined the Phobians in December 2019 is sad the league has been declared null and void after 15 matches were played.

He said he was hoping the league will resume at some point.

"It was a blow to me because I was expecting the resumption of the league so we can continue from where we left off,” he told Citi sports.

“But then the decision they took we were into it and thought it wasn’t right for football to continue.”

“In as much as it is a blow to me, I have no option than to accept it and slow down on my training section.”