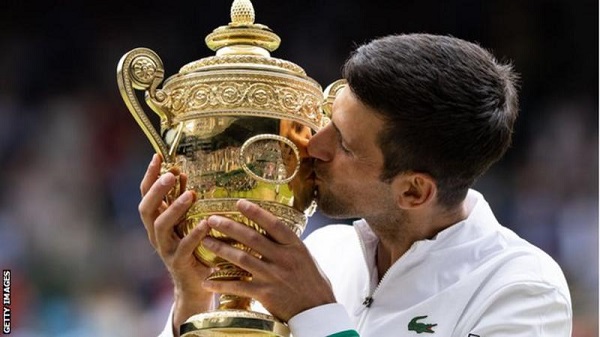 Novak Djokovic can defend his Wimbledon title after organisers said players who are not vaccinated against Covid-19 will be allowed to compete.

The Serbian world number one, 34, was not allowed to play at the Australian Open in January following a row that centred around him being unvaccinated.

"The requirement set out by the government to enter the UK does not include mandatory vaccination," All England Lawn Tennis Club chief executive Sally Bolton told a news conference.

"Therefore, while it is of course encouraged, it is not a condition of entry."

After the high-profile saga around the Australian Open, which ended with him being deported because of his Covid status, Djokovic then missed other tournaments including Indian Wells and Miami because of coronavirus rules for entry to the United States.

During that period he also lost the world number one ranking to Russian Daniil Medvedev but has since reclaimed it and has been back at tournaments with many countries relaxing their entry requirements regarding vaccination.

Djokovic reached his first final of the year last weekend, losing to Russian Andrey Rublev in the Serbia Open in Belgrade.

Djokovic, who has won 20 Grand Slam titles, told the BBC in February he would rather miss out on future tennis trophies than be forced to get a Covid vaccine.