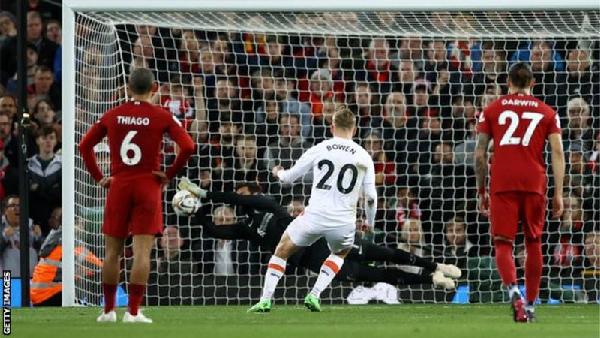 Darwin Nunez scored his first Anfield goal for Liverpool and Alisson saved a penalty as the Reds defeated West Ham 1-0 in an incident-packed encounter.

Nunez had already gone close with a rasping attempt when he rose to meet Kostas Tsimikas' cross and plant a downward header beyond the reach of Lukasz Fabianski.

The busy Nunez was presented with a chance to double the lead moments later but this time Fabianski was able to save before the Hammers were awarded a penalty after Joe Gomez's foul on Jarrod Bowen.

Bowen picked himself up to take it but Alisson produced a fine diving save in front of the Kop to ensure Liverpool backed up their excellent win over Manchester City on Sunday with another three points.

Elsewhere, Chelsea extended their unbeaten run to seven games under Graham Potter after a goalless draw against a battling Brentford side.

In a hard-fought west London derby, the hosts had three good chances, but Blues goalkeeper Kepa Arrizabalaga twice kept out headers from Ivan Toney and another one from Bryan Mbeumo.

Substitutes Pierre-Emerick Aubameyang and Christian Pulisic nearly won it late on for the visitors, but Raya again did well to make vital saves to keep it level.

Bees boss Thomas Frank will be delighted with the performance from his side, who were the better team for large parts of a tight match at the Gtech Community Stadium.

But Frank had to suffer some nervous moments in the four minutes of stoppage time as Carney Chukwuemeka forced a fine save from Raya, before Chelsea appealed for a penalty for a handball, but referee Jarred Gillett felt Ethan Pinnock had not committed an offence.