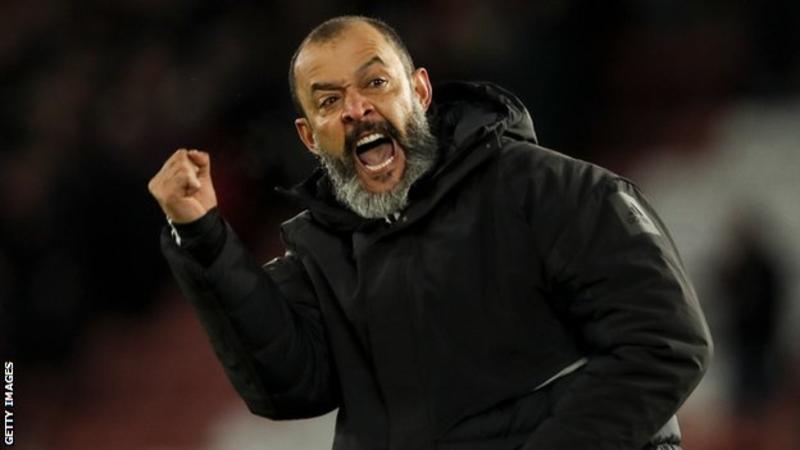 Nuno Espirito Santo likes his players to have a sharp eye andÂ to be able to hit the targetÂ but it is not just in front of goal that the Wolves manager values accuracy.

One of the factors that has enabled the 46-year-old former goalkeeper to lead his team to sixth in the Premier League is a focus on team morale and bonding. Since the start of his coaching career, the Portuguese has placed great emphasis on tight-knit squads, and it all starts with paintball.

After finishing his playing career at Porto in 2010 - having famously been an unused substitute in the club's 2004 Champions League win under Jose Mourinho during an earlier stint at the Estadio do Dragao - the rookie coach was handed his first chance at Rio Ave, a club used to plodding along in the Portuguese top flight.

To shake things up, a young squad and dynamic coaching team was assembled.

Hassan 'Kouka' Ahmed was in his first season as a professional at Rio Ave when Nuno arrived. He was part of a squad that included both Jan Oblak and Ederson, now at Atletico Madrid and Manchester City respectively and two of the world's finest goalkeepers.

"We used to go paintballing and zipwiring as a squad," the Olympiakos and Egypt striker recalls. "It was a little bit risky but it was fun and brought the group together. After matches and training, the squad would spend time together and this was something he thought was important - he wants everyone to be united and sometimes he does different things to create a good atmosphere."

Shooting one another with pellets of paint is the only conflict Nuno will permit in his squad.

There has been an emphasis on creating a small, unified group of players to make up the first team at each club Nuno has managed, starting with Rio Ave and moving on to Valencia, Porto and now Wolves. Indeed, Wolves have used just 20 players in the Premier League this season, made more surprising by their success in the Europa League, a competition they started back in July.

His awareness of the importance of keeping everyone involved is likely a consequence of his playing experience. Throughout his career, he was more used to sitting on the bench than being the starting goalkeeper and he never likes a player to think they have no chance of being part of the next match.

"In a small squad it is easier to manage the players and egos," says Joao Teixeira, signed by Nuno from Liverpool in 2016 after the manager returned to Portugal following a year as Valencia's head coach.

"You have so many games in England that if you have a small squad everyone is going to have the chance to play, and players know. It keeps everyone motivated, as no-one can play 40 or 50 games a year straight."

Few goalkeepers become head coaches but Nuno was always determined to be the main man. Whether he was in between the sticks, on the bench or in the stands, he regularly had the best view of proceedings throughout his playing career, allowing him to formulate ideas of how he would want his teams to play.

At Rio Ave a few players needed time to trust a goalkeeper and his coaching plans but Kouka was sold immediately. "I think it was very quick that we had confidence in him," Kouka says.

Teixeira adds: "Goalkeepers see the game from a different perspective. He was the guy behind the team, so he could see all the game, where everyone was on the pitch, so that helped."

Nuno settled quickly into his new role at Rio Ave, leading them to a 1-0 away win at Sporting Lisbon in just their second game of the season, kick-starting their first top-six finish in over 30 years.

The most notable thing Nuno did as a player was become Jorge Mendes' first client and there is little doubt he has been aided by the clout the super agent has in the market, helping the club attract players of the calibre of strikers Raul Jimenez and Diogo Jota, midfielders Joao Moutinho and Ruben Neves and goalkeeper Rui Patricio, to name a few.

In moulding his squad, one key trait Nuno looks for is adaptability. He often changes tactics game by game and so needs players who can take on instructions quickly and who are able to fit into numerous formations.

A small - but important - demand Nuno places on his players is that they must wear shinpads at training. This is not the norm in the professional game, but Nuno sees it as essential so that training is hard and intense and ensures everyone is fully prepared for games.

Another key part of training is Nuno's backroom staff, who have stayed with him throughout his managerial career.

"They were very intelligent and full of ideas, always making you want to work," Kouka says. "Sometimes players feel a little bit lazy and maybe don't want to work, but these staff would always keep pushing you. Even if you couldn't see something in your game, they would spot it and try to help you."

Keeping all of the squad onside is an important part of Nuno's philosophy and his office is open to those seeking advice or to discuss any part of football or life.

Kouka says: "He always had time for every individual player and would make time to speak to them to explain things, as he was always trying to get the best out of everyone. I will never forget when he told me that to reach the top level 'you can't just dream about it, you have to work for it'.

"I owe him a lot, as I learned a lot from him and I think he is a fantastic coach."

Wolves have progressed to the last 16 of the Europa League and, assuming this season resumes at some stage, Champions League qualification through the league is not out of the question - they are two points off fifth place, which would be enough if Manchester City's European ban is upheld.

Nuno's pre-match team talks - a key motivational weapon for any manager - have been part of their success.

Both Kouka and Teixeira describe his "speeches", performed to whip up his players into a frenzy just in time for kick-off. The tone would vary depending on the situation but Nuno generally judged the mood right.

"He knew when to be calm and when to be angry," says Kouka. "He sometimes would shout at me as he wants the best from everyone but he did it with respect as he respects everyone."

As a goalkeeper turned elite manager, Nuno has already broken the mould as a coach and there seems little to stop him going even higher.

"There is not a lot of success with goalkeepers becoming a head coach but he has proved that wrong and he is one of the best coaches in the world and he's ambitious," Kouka says.

"We saw this in the first year and knew he was not going to just stick with Rio Ave. He was set for bigger things and he has been in very big teams, which makes sense from what we did in Portugal."