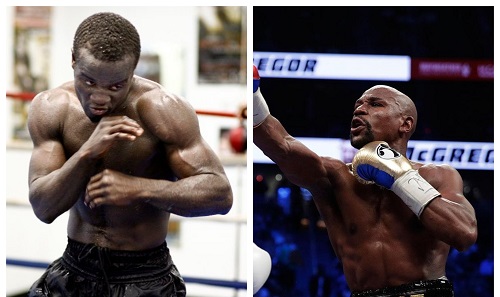 Joshua Clottey has thrown a challenge to former five-weight division champion Floyd Mayweather that he can never outbox him in the ring because of his style of fighting.

Speaking to Joy FM, the former IBF welterweight champion said boxers like Mayweather (retired) cannot trouble him in the ring because they do not throw combinations and are not fast.

"Fighters like Mayweather feels they throw the punch to a right target and not just throwing it, but I have a very good defence and If I am fighting with such boxers who don't throw combinations I don't have a problem with them because my defence will block their punches."

However, Joshua averred that it doesn't believe Mayweather will give him a shot when he comes back from retirement, as he may want to stage a comeback with Manny Pacquiao rather.

Floyd Mayweather has retired from professional boxing with a record of 50 wins out of 50 fights.

Meanwhile, Joshua Clottey has disclosed that his fight with British boxer Tommy Jacobs set to come off this November in Birmingham has been rescheduled.

"I was supposed to fight on 22nd November this year but the fight was called off and has been rescheduled to 22nd February."

"After fighting in February, I will reassess myself on whether to continue boxing or not."

"I'll go to the US and stay there till January and come back to Ghana and train fully for the fight in February."