My manager cheated me in Pacquaio’s fight - Joshua Clottey 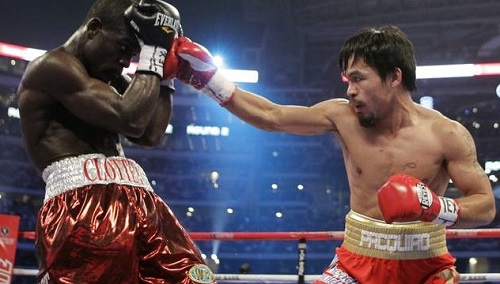 Former International Boxing Federation (IBF) welterweight champion, Joshua “The Hitter” Clottey, has revealed how he was short-changed by his former manager, Vincent Scolpino, in the biggest fight of his career against Manny Pacquaio in 2010.

Clottey lost via a unanimous points decision to the legendary Pacquaio in their March 13, 2010 fight for the WBO welterweight championship at the AT&T Stadium in Arlington, Texas, USA. And almost a decade on, the former world champion say into the fight with the hard-hitting Filipino mentally drained and that contributed immensely to his defeat.

The 41-year-old Ghanaian boxer, who fought the likes of Miguel Cotto, Antonio Margarito, Zab Judah and the late Diego Corrales in his prime, has narrated how he was cheated by his then manager Scolpino in what proved to be his biggest payday.

Nine years after his lopsided loss to the Filipino legend, Clottey has opened the lid on what he claimed to be incidents in and out of the ring which affected him negatively in the biggest fight of his career. He admitted to losing control in the ring, following his manager’s decision not to heed to his terms in the contract.

“It was the biggest fight of my career and Ghanaians expected more from me knowing how I box, but I can tell you that conditioning is very key in the life of every boxer," he told Graphic Sports.

“I first read the news of my fight with Pacquaio on the internet and I called Vincent Scolpino to enquire whether it was true and he told me he was yet to accept the terms,” Clottey recounted.

“He later called to inform me about the money involved and I told him to reject the offer because, considering the pay-per-view status of the fight, I felt I was being cheated.

“My manager at the time went ahead to sign the contract on my blind side because of how much he would earn from the deal without thinking about my welfare, and it really affected me mentally,” bemoaned Clottey who held the IBF title for just 10 months before losing it to Cotto.

Clottey went ahead to challenge Pacquaio for the WBO welterweight crown but lost miserably to the Filipino in a one-sided fashion. He later blamed the defeat on stomach upset after eating okro soup which had saltpetre or ‘kawe’ in the local dialect (kawe is widely used as a thickening or preserving agent in okro soups).

The Ghanaian’s excuse was rubbished by some boxing enthusiasts who felt he was offered cash to lose to Pacquaio due to his failure to be competitive throughout the fight.

When asked about that conspiracy theory, Clottey admitted that his career took a nosedive after the defeat to Pacquaio but questioned why he would accept financial inducement to kill all that he had laboured for.

“It is normal for people to be disappointed with you after that abysmal performance which ended my career but I cannot accept money from my opponent’s camp to lose my reputation,” he explained.