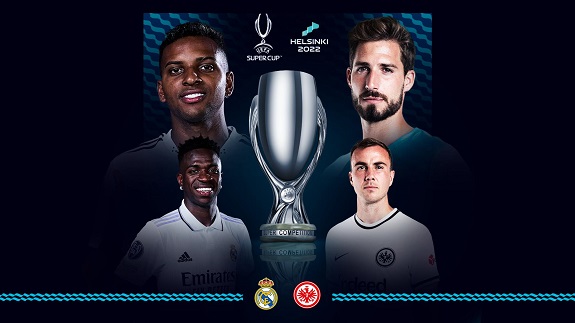 The first European honour of the 2022-23 season is up for grabs at the Olympic Stadium in Helsinki, as Real Madrid and Eintracht Frankfurt take part in the latest edition of the UEFA Super Cup at 7:00 pm tonight.

Los Blancos edged out Liverpool to win their 14th Champions League crown last term, while the Bundesliga outfit came up trumps in the Europa League.

Paris Saint-Germain capitulated. Chelsea's magnificent fightback was in vain. Manchester City felt the full force of Rodrygo. No matter how many times Real Madrid appeared to be down and out in the Champions League, serial winner Carlo Ancelotti had other ideas.

The final at the Stade de France will forever be overshadowed by the harrowing scenes outside the stadium as fans were refused entry, tear-gassed by riot police and targeted by opportune criminals, and celebrating Vinicius Junior's winner almost seemed inappropriate for some at the time.

Nevertheless, Real Madrid and four-time Champions League winner Ancelotti were allowed to savour the moment back home after completing a domestic and European double, and the defence of their La Liga crown will soon commence against Almeria this weekend.

Real Madrid would only take part in three pre-season friendlies last month, firstly losing to Barcelona in what was billed as a friendly - which it never is with El Clasico - before drawing 2-2 with Club America and securing a straightforward 2-0 win over Juventus.

Karim Benzema was unsurprisingly on target in the latter two matches as the 34-year-old aims to spearhead the Los Blancos charge in yet another European final, and they have lifted the Super Cup aloft in 2002, 2014, 2016 and 2017 but were defeated by city rivals Atletico Madrid four years ago.

The Deutsche Bank Park played host to some magnificent European nights last season, as Eintracht Frankfurt left the likes of West Ham United, Real Betis and even Barcelona in their wake en route to the 2022 Europa League final, where a bouncing Rangers outfit stood in their way.

With nothing to separate the two sides after a tense 120 minutes of action, Gers loanee Aaron Ramsey would make headlines for all the wrong reasons in Scotland after seeing his spot kick saved by Kevin Trapp, as Frankfurt remained perfect from 12 yards to secure the trophy.

Not since the 1979-80 season had Frankfurt experienced a taste of European success - winning the UEFA Cup as it was then known 42 years ago - and Wednesday's game will mark their inaugural appearance in the UEFA Super Cup.

Oliver Glasner's side have already kicked off their bid to improve on an 11th-placed Bundesliga finish from last season, but they were handed a baptism of fire on Friday against reigning champions Bayern Munich, who stormed to a 6-1 success at the Deutsche Bank Park.

Seeking to quickly dust themselves down after such a humbling opening-day defeat, Frankfurt meet Real Madrid for just the second time this week, and if Wednesday's game is anything like Los Blancos' enthralling 7-3 win in the 1960 European Cup final, the Scandinavian supporters will certainly get their money's worth.

Real Madrid head into the Super Cup without any injury concerns bedevilling Ancelotti, although Reinier Jesus has been absent from training in anticipation of another loan move away from the club.

Ancelotti must decide whether to hand competitive debuts to Antonio Rudiger and Aurelien Tchouameni here, but the duo are seemingly fighting an uphill battle to become regular starters this season.

As was the case last year, Rodrygo may be kept on the bench until required, with Federico Valverde being given the nod to join Benzema and Vinicius in the final third.

As for Frankfurt, Glasner has already ruled defender Jerome Onguene out of the Super Cup, with the 24-year-old still sidelined with a troublesome thigh problem, and Aurelio Buta is recovering from knee surgery.

The German side otherwise have no players in the treatment room - Hrvoje Smolcic will also return from a domestic suspension - but Glasner still has some key decisions to make after the manner of his side's humiliating loss to Bayern.

Jesper Lindstrom, Sebastian Rode and Rafael Borre were all taken off at half time in that game, with the latter's replacement, Randal Kolo Muani, scoring his side's consolation after his move from Nantes.

Borre may still be preferred from the start in Helsinki given his exploits in the Europa League last season - the Colombian scored three goals in their final four games in the tournament, including the equaliser in the final against Rangers.

Meanwhile, Filip Kostic has seemingly played his final game for Frankfurt as he closes in on a move to Juventus, which should therefore see Christopher Lenz start on the left-hand side.