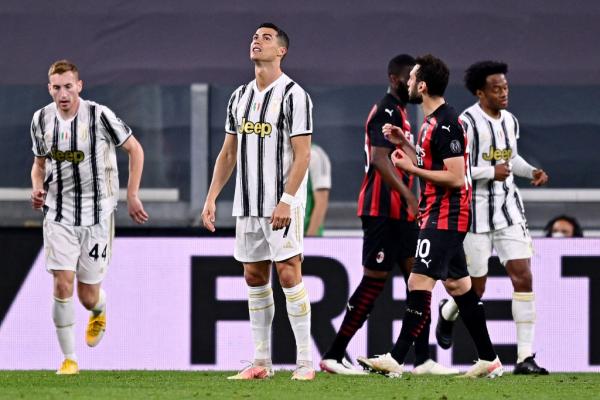 Andrea Agnelli watched his dream of Juventus being out of the Champions League move a step closer after they were thumped 3-0 by AC Milan.

The Juve chairman was a driving force behind the now disbanded European Super League, with the Italian giants still technically involved in the doomed proposals.

Even after nine of the 12 founding members withdrawn from a tournament that promised to set-up a closed shop at the top of European football, Agnelli said he â€œremained convinced at the beauty of the projectâ€.

Ironically, Juventus are now staring down the barrel of missing out on Europeâ€™s elite competition after their latest Serie A disaster.

The Bianconeri came into Sundayâ€™s game level on points with Milan and just one behind Napoli.

However, goals from Brahim Diaz, Ante Rebic and Chelsea loanee Fikayo Tomori condemned them to a humiliating defeat.

The result means Juventus now face a real battle to finish in the top four, with just three games remaining of the current campaign.

Cristiano Ronaldo was left crestfallen on another disappointing night for the Portguese legend. Tomori handled the 36-year-old with impressive ease as his frustrating stay in Turin looks set to continue.

The forward left Real Madrid in 2018 with the expressed desire of adding to his five European Cups but has been left despondent after a series of embarrassing exits.

Exits to Ajax, Lyon and FC Porto in consecutive years will have likely annoyed Agnelli, with the three, in his humble opinion, undeserving of a place amongst the real elite of football.

Speculation has already been swirling about Ronaldoâ€™s future with Paris Saint-Germain and Manchester United both touted as potential destinations.

The Old Lady are desperate to cut their cloth accordingly after missing out on the guranteed income that the ESL would have provided.

A season in the Europa League means it almost a guarantee that Ronaldo will be departing Turin as both parties look back on a failed transfer experiment.

Juventus close out their league campaign with fixtures against Sassuolo, champions Inter Milan and Bologna on the final day.