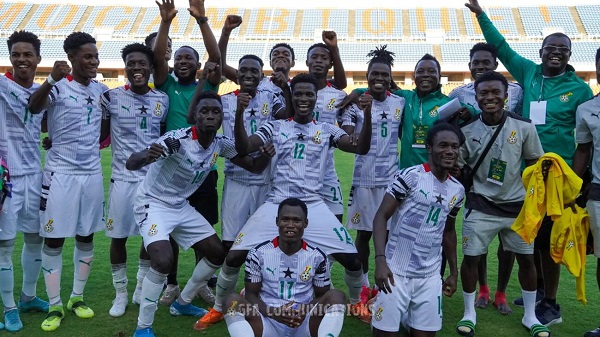 Hearts of Oak forward Daniel Afriyie Barnieh scored a brace as Black Meteors secured a 2-1 win over Mozambique in the first leg of the TotalEnergies CAF U-23 qualifying match on Sunday.

The 21-year-old netted on the 61st and 76th minutes before the hosts capitalized on a mistake on the 88th minute to pull one back.

The game got off with a solid start with the Black Meteors dictating play and enjoying lots of possession.

Mozambique however kept it compact in defense and managed to keep the Ghanaian forwards at bay.

After a goalless first half, Ghana came into the second half strongly and was rewarded with a penalty kick on the 61st minute which was well coveted by Barnieh.

Another impressive run by Afriyie Barnieh resulted in a second penalty for the Black Meteors.

Barnieh converted again to make it 2-0, however, the home side pulled one back after the Ghanaian defense failed to clear a rebound.

The win puts Ghana on a strong footing ahead of the return leg which will be played at the Baba Yara Stadium on Sunday, October 30,2022.

A win for Ghana in the return encounter will take Ghana into the final round of the qualifiers where the Black Meteors will face either Ethiopia or Algeria.

The team is expected to arrive in Accra on Tuesday and will commence camping in Kumasi from Wednesday.