Video: Etouga fires Kotoko to victory over Hearts of Oak 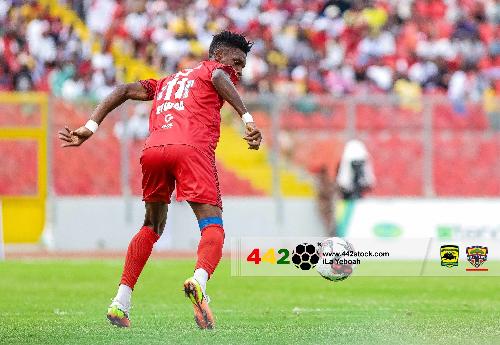 Etouga's strike from the spot gave the Porcupines a 1-0 victory over Samuel Boadu's side at the Baba Yara Stadium in a Ghana Premier League matchday 24 fixture.

Kotoko started the better of the two sides and clever play from Brazilian midfielder Fabio Gama saw Abdul Aziz Nurudeen foul him and it resulted in a penalty.

Cameroonian striker Frank Etouga Mbella stepped up and converted in the 17th minute to make it 1-0 to Kotoko.

17' Etouga scores from the spot to give the Porcupine Warriors the lead!@AsanteKotoko_SC 1 : 0 @HeartsOfOakGH

That goal was his 16th goal of the season in the Ghana Premier League.

Kotoko had other chances but were unable to add to the lead as the game ended 1-0 in the first half to the Porcupines.

The second half started in similar fashion with Kotoko dictating the pace of the game and chances fell the way of Gama and Mfegue but could not add to their tally.

Hearts of Oak introduced former Kotoko defender Samuel Inkoom into the game but could not find the much-needed equalizer.

Kotoko got the all-important win and are now leading the GPL table with 52 points.