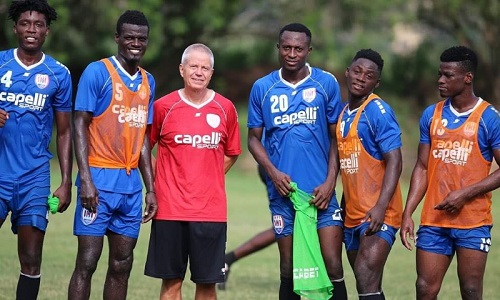 Inter Allies coach Henrik Peters Lehm is optimistic his outfit will be ready for the start of the 2020/21 Ghana Premier League.

Henrik Peters Lehm's charges are keeping up with preparations ahead of the start of the new season, as they play their opening game against Dreams Fc at the Accra Sports Stadium.

The Capelli boys go into the new season with a number of new faces having lost some key players to the European transfer market.

The club before the transfer window slammed shut on October 31 beefed up their squad with the acquisition of Ali Issah, Michael Kporvi, Emmanuel Adjetey, Taufiq Shaibu.

They have also promoted six players from their academy to fill the void left by the departed players. They are Klinsman Annan, Patrick Amarh, Isaac Mensah, Christian Adjei, Ibrahim Eshun & Collins Kudjoe who have been rewarded with progress to the senior group.

According to the coach, he's confident that he can put together another formidable team despite the departure of key players including Victorian Adebayor who was leading the goalscoring chart with 12 goals in 15 appearances before the 2019/20 League was halted and later cancelled.

"It's a new team , we have sold seven players to Europe so we have alot of work to do. We are in the hurry. I think what is good about Inter Allies is they have a lot of young players and a good academy. We promoted six players from the academy to first-team and they are playing well. We have new players and we are working on them and very soon we will have a strong team again."

"I hope we can play some good football and start scoring some goals again."