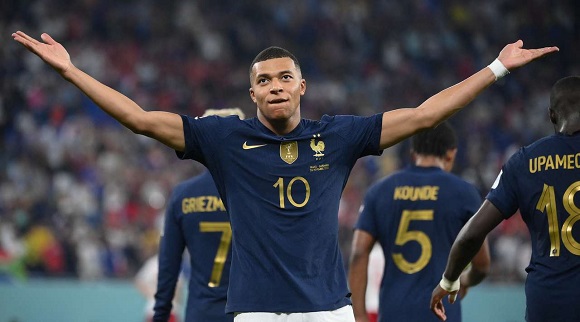 France became the first side at the FIFA World Cup 2022 to book their place in the last 16 as a late Kylian Mbappe strike condemned Denmark to a 2-1 defeat at Stadium 974 to leave their hopes of progressing to the next round hanging in the balance.

Les Bleus were the better side in the first-half, and created the better chances to score. The best of them fell to Mbappe five minutes before half-time, but he could only guide Ousmane Dembele’s cross from the right over the bar from inside the penalty area.

Eventually, with 61 minutes on the clock, the deadlock was broken. Theo Hernandez combined well with Mbappe and the latter guided a difficult finish from inside the box past Kasper Schmeichel in the Denmark goal.

However, Didier Deschamps’ side only led for seven minutes, as Denmark hit back quickly. Christian Eriksen’s corner from the right-hand side was flicked on by Joachim Andersen to the path of his centre-back partner Andreas Christensen, who sent a downward header past Hugo Lloris.

Big chances bypassed both sides in the following moments as the end drew closer, but in the 86th minute, France found the winner they were looking for, and Mbappe had his brace.
The forward did well at the back post to peel away from his man and latched onto Antoine Griezmann’s cross to bundle the ball into the net as Les Bleus booked their place in the knockout stages.