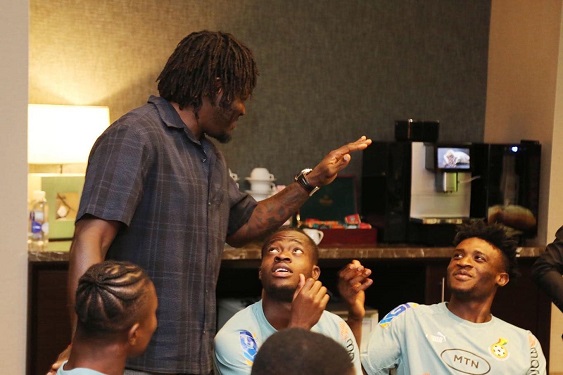 Ghana will wrestle for the points against the former European Champions at the 974 stadium in Ras Abou Aboud, Doha on Thursday, November 24, 2022.

Sulley Muntari who represented Ghana in three World Cup tournaments paid a surprise visit to the team at their camp base in Doha to motivate them ahead of their Group H opener.

He shared a few words with the players and the technical team behind closed doors before having a brief chat with the media.

‘’They were calm, everybody knows it is a big game tomorrow. They have played many big games in their lives so it’s not new to them playing at this stage’’ he said.

‘’Of course, there is a little bit of pressure going into the match but I am hundred percent sure that they will definitely do well’’ he added.

Ghana, four-time African Champions are making a record 4th World Cup appearance in Qatar and aim to surpass the quarter final berth that was achieved in South Africa 2010.

Coach Otto Addo’s team will compete with Portugal, South Korea and Uruguay in the group stage of the global showpiece.