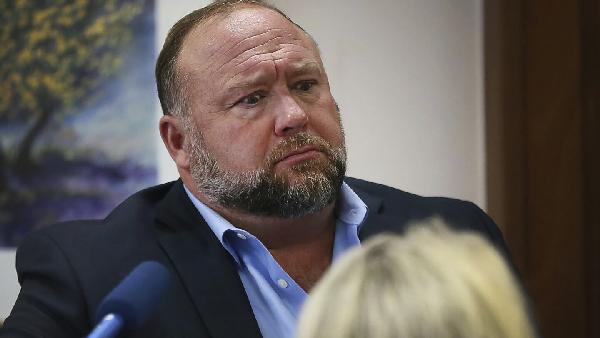 US conspiracy theorist Alex Jones has been ordered to pay $49.3m (£41m) in damages after falsely claiming a 2012 school shooting was a hoax.

A jury in Texas ruled the radio host must pay $45.2m in punitive damages, in addition to $4.1m in compensatory damages they awarded a day earlier.

The two-week defamation trial was brought by the parents of a child killed in the attack.

Twenty children and six adults were killed at Sandy Hook in Connecticut.

The lawsuit was filed by Scarlett Lewis and Neil Heslin, the separated parents of six-year-old Jesse Lewis, who died in the primary school shooting.

The plaintiffs - who said they had endured harassment and emotional distress because of the Infowars founder's misinformation - had sought $150m.

The punitive damages are meant to act as a deterrent, and to stop Jones from repeating his offence.

"We ask that you send a very, very simple message and that is: Stop Alex Jones," a lawyer for the parents said in court on Friday.

"Stop the monetisation of misinformation and lies. Please."

Earlier on Friday, an economist hired by the parents testified that Jones, his media brand Infowars and parent company Free Speech Systems are worth up to $270m.

Bernard Pettingill told the court that records indicate Jones withdrew $62m for himself from his company in 2021 as his legal troubles grew.

"That number represents, in my opinion, a value of a net worth," Mr Pettingill said. "He's got money put in a bank account somewhere."

Free Speech Systems filed for bankruptcy protections in the first week of the two-week trial.

The trial heard that Jones' business had earned about $800,000 in a single day selling diet supplements, gun paraphernalia and survivalist equipment.

Lawyers for the parents accused Jones of trying to hide evidence, and argued that he had committed perjury when he denied having sent any messages about the Sandy Hook attack.

Earlier this week, an attorney for the plaintiffs revealed that Jones' legal representative had accidentally sent them two years of the radio host's telephone texts.

He said that the congressional committee investigating last year's US Capitol riot had requested access to the messages as they look into Jones' alleged role.

This is the first of three trials against Jones being brought by family members of Sandy Hook victims.

He has already lost a series of defamation cases filed by parents of the victims by default after failing to produce documents and testimony.

But this was the first trial in which financial damages were agreed by a jury.

Jones appeared briefly in the court on Friday, but was not present for the final verdict.

Despite retracting his claims about Sandy Hook, Jones has continued to use his media platform to argue the case was rigged against him and claimed that members of the jury pool "don't know what planet they're on". His Infowars website depicted the judge being consumed by flames.

His behaviour triggered several rebukes from the judge, who at one point told him: "This is not your show."

After the verdict on Friday, he posted a video where he claimed his net worth to be a fraction of what was said in court, and condemned the trial as "beyond any kangaroo-rigged court ever".

Jones - a popular figure in US fringe conservative commentary - has repeatedly argued that the Sandy Hook shooting was a hoax orchestrated by the government to strip Americans of gun rights, and that the parents of the dead children were "crisis actors".

His lawyer had cited US constitutional free speech protections and asked for leniency in the trial, saying the jury had already sent a message to all radio hosts "that their standard of care has changed".