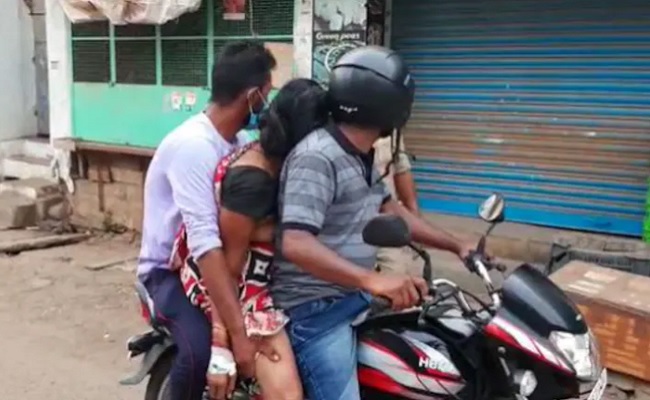 In a heart-wrenching development in Andhra Pradesh, due to the non-availability of ambulance, a woman's dead body had to be taken to her native village on a motorbike.

The shocking incident took place in Kasibugga town in Srikakulam district on Monday.

A video showing the deceased woman on a motorbike, wedged between her son-in-law and son, has left netizens shocked at the prevailing situation in the state.

The victim, aged around 50 years, belonged to the Mandasa Mandal in Srikakulam district. According to local sources, following complaints of sickness, her family members on Monday took her to a private hospital in Kasibugga town near Palasa for treatment.

On examining her, the doctor informed the family members that her oxygen level was low, and advised a CT scan to ascertain the problem.

However, on their way back to the hospital after conducting the CT scan, the woman passed away. Following this, the autorickshaw driver immediately forced the family to alight from his vehicle and drove away.

Despite their best efforts, the woman's family failed to secure the services of an ambulance to transport her body to their native village which is about 15 km away.

Finally, they decided to carry her on their motorbike itself. The woman's son-in-law and son placed her body in a seated position between them, and rode to their native village. In the video, they could be seen explaining their predicament to a few policemen, before riding away.

According to local sources, the woman's test result confirmed that she had contracted Covid-19.