Coronavirus: Nigeria to ease Abuja and Lagos lockdowns on 4 May 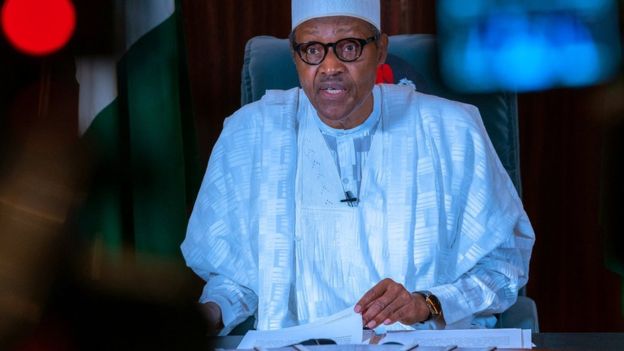 Nigeria will begin a "gradual easing" of coronavirus-related lockdowns for millions of people in its largest city Lagos and the capital Abuja.

President Muhammadu Buhari said the lockdowns, which had been due to end on Monday, needed to continue until 4 May.

He also ordered new nationwide measures against Covid-19, including a night-time curfew and mandatory face masks.

The moves would ensure the economy functioned "while still maintaining our aggressive response", Mr Buhari said.

The easing will apply to Abuja, Lagos and neighbouring Ogun state, where collectively more than 25 million people have been under lockdown since 30 March. Other states have introduced their own measures.

Before the announcement, workers at a construction site in Lagos rioted in protest at the lockdown.

A police spokesman said the workers at the Lekki Free Trade zone - including those at the oil refinery of billionaire Aliko Dangote - injured several officers in the area. Fifty-one people were arrested, he added.

There are reports that the protesters were angry that some foreign nationals were allowed to go to work at the site.

In a televised address on Monday night, Mr Buhari acknowledged that the lockdowns in Abuja, Lagos and Ogun had "come at a very heavy economic cost" since they began on 30 March.

"Many of our citizens have lost their means of livelihood. Many businesses have shut down," he said.

He added: "No country can afford the full impact of a sustained lockdown while awaiting the development of vaccines."

The president said there would therefore be a "phased and gradual easing" of these lockdowns next Monday to allow some economic activities to resume.

But to limit the spread of Covid-19, he announced that the government would impose a curfew across the country between 20:00 and 06:00, require everyone to wear face masks in public, and stop "non-essential inter-state passenger travel".

Bans on social and religious gatherings will also remain in place.

Mr Buhari also expressed deep concern over the unexplained deaths of a number of people in the northern state of Kano.

He said a lockdown would be imposed there for two weeks with immediate effect and that he was sending a government team to investigate.