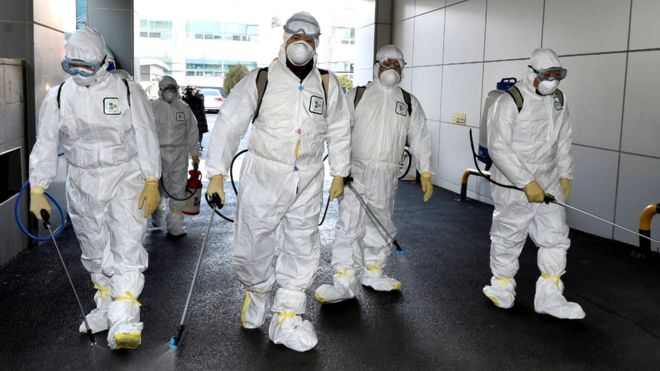 South Korea says the number of new coronavirus cases in the country has more than doubled in one day.

Officials said on Saturday that 229 new cases had been confirmed since Friday, raising the total to 433.

Many of the new cases are linked to a hospital and to a religious group near the south-eastern city of Daegu, authorities have said.

Two patients in South Korea have died so far and there are fears the number will rise.

Daegu and nearby Cheongdo - where the hospital is situated - have been declared "special care zones" and the streets of Daegu are reported to be largely abandoned.

South Korea has now reported the largest number of confirmed infections outside China - 76,288 cases including 2,345 deaths - and the outbreak on the Diamond Princess cruise ship off the coast of Japan which has seen more than 600 cases.

The latest developments came as Chinese health authorities reported a decrease in the rate of deaths and new cases of the coronavirus on Saturday.

The head of the World Health Organization (WHO), Dr Tedros Adhanom Ghebreyesus, has expressed concern at the number of new cases with no clear link to China or other confirmed cases.

He said the greatest concern now was countries with weaker health systems, particularly in Africa.

Outside China, more than 1,200 cases of the virus have been confirmed in 26 countries and there have been at least eight deaths, the WHO says.

An evacuation flight carrying 32 British and other European cruise ship passengers from Japan has landed in England
Italy reported its second death from the virus - a woman living in the northern region of Lombardy - a day after a 78-year-old man became the first person in Italy to die from the new coronavirus.
Iran reported its fifth death from the disease. The outbreak is centred on the holy city of Qom but officials warned that the virus may already have spread to "all cities in Iran"
The new virus, which originated last year in Hubei province in China, causes a respiratory disease called Covid-19.

What happened in South Korea?
Medical officials first announced 142 new cases on Saturday and then hours later increased the number by 87.

In a statement, the Korea Centers for Disease Control and Prevention (KCDC) said that of the 229 new cases, 95 were related to Daenam Hospital in Cheongdo. There are now 114 confirmed cases at the hospital - nine staff and 102 patients - it added.

Mr Kim said most of those diagnosed had been inpatients for mental health issues. He said some cases showed "no confirmed epidemiological connections", meaning it was not clear how they had contracted the virus, he added.

A 63-year-old man died at the hospital on Wednesday and another patient died on Friday in Busan after being transferred from Daenam Hospital, Yonhap news agency reports.

KCDC said 62 new cases - 231 in total - were connected to a Christian sect in Daegu called the Shincheonji Church of Jesus.

Authorities have highlighted that a large number of sect followers attended the funeral of the founder's brother from 31 January to 2 February.

The agency said it had placed 9,336 Shincheonji members in self-quarantine and that, of those, more than 500 were being tested for the coronavirus.

The sect, which has been accused of being a cult, said it had now shut down its Daegu branch and that services in other regions would be held online or individually at home.

At a news briefing, Mr Kim expressed optimism that the outbreak could be confined to the region around Daegu.

"Although we are beginning to see some more cases nationwide, infections are still sporadic outside of the special management zone of Daegu and North Gyeongsang Province," he told reporters.

What has the WHO said?
In a briefing to the African Union on Saturday, Dr Tedros said the WHO was working with African governments to train thousands of health workers and to provide equipment to identify and treat infected people.

"Our biggest concern continues to be the potential for Covid-19 to spread in countries with weaker health systems," he said. "We are working hard to prepare countries in Africa for the potential arrival of the virus."

Dr Tedros said some countries, such as the Democratic Republic of Congo, were using experience gained from testing for the Ebola virus to test for the new coronavirus.

"This is a great example of how investing in health systems can pay dividends for health security," he said.

A team of experts from the WHO is due to arrive in the Chinese city of Wuhan, where the outbreak first emerged, on Saturday.

What's happening elsewhere?
Passengers of the Diamond Princess who have tested negative continue to disembark the ship in Yokohama after more than 14 days quarantined on board.

However, 18 American evacuees from the ship tested positive after arriving in the US, officials said. More than 300 other US nationals have arrived back in the US after disembarking.