Covid: Biden vows 100m vaccinations for US in first 100 days 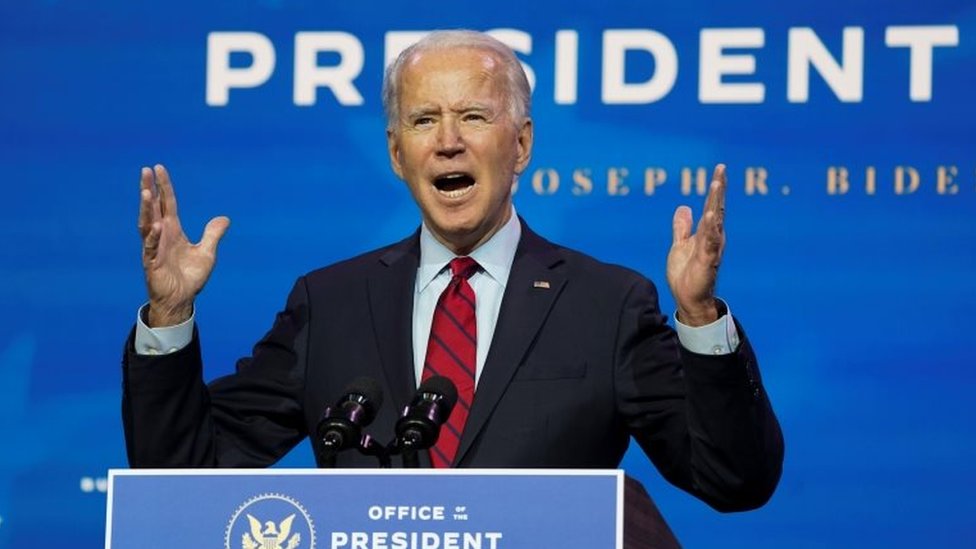 US President-elect Joe Biden has set a goal of 100 million Covid vaccinations in his first 100 days in office.

He said his first months in office would not end the outbreak and gave few details on rollout strategy but he said he would change the course of Covid-19.

Introducing his health team for when he takes office on 20 January, he urged Americans to "mask up for 100 days".

On Tuesday, a report paved the way for a Pfizer/BioNTech vaccine to be approved and rolled out for Americans.

The US has recorded more than 15 million cases of infection in the pandemic so far and 285,000 deaths, according to Johns Hopkins University research, both global highs.

Many parts of the country are seeing peak infections, with record numbers of people in hospital, with some experts blaming travel by millions over the recent Thanksgiving holiday.

What has Biden said?
The president-elect was attending a press conference in Delaware during which he introduced California Attorney General Xavier Becerra as his nomination for health secretary and his choice of Rochelle Walensky as head of the Centers for Disease Control and Prevention (CDC).

Mr Biden said: "My first 100 days won't end the Covid-19 virus. I can't promise that. But we did not get into this mess quickly. We're not going to get out of it quickly."

He said in the first "100 days we can change the course of the disease and change life in America for the better".

But he warned that the coronavirus efforts could "slow and stall" if Congress did not conclude bipartisan talks and urgently come up with funding.

Getting children back to school would also be a priority, he said.

Mr Biden gave few details of how the largest vaccination programme in US history would be carried out.

He complained last week he had been given no rollout plans by the Trump administration. Operation Warp Speed's top scientist Moncef Slaoui has still to meet the Biden team and is expected to do so this week.

Among Mr Biden's other aides will be Dr Anthony Fauci as chief Covid medical adviser. The infectious diseases expert also advised the Trump team - and often fell foul of the president for his views.

What happened at the White House?
It was mainly a celebration of Operation Warp Speed's efforts to get a vaccine to the American people, although any rollout would be under Joe Biden.

President Trump said of the expected vaccine approvals: "They say it's somewhat of a miracle and I think that's true."

He added: "Every American who wants the vaccine will be able to get the vaccine and we think by spring we're going to be in a position nobody would have believed possible just a few months ago."

The Trump administration hopes to vaccinate as many as 24 million people by mid-January.

The president also signed an executive order aimed at ensuring that Americans had first priority in receiving doses - a move that appeared to follow his longstanding America First policy.

But how it will affect contracts that US companies have already signed with other countries remains unclear.

Mr Trump's administration did sign up for an initial 100 million doses of the Pfizer/BioNTech vaccine but a member of the Pfizer board said the chance to buy more was turned down a number of times and more than the 100 million might not be available until June.

The UK on Tuesday begin the world's first approved rollout of the vaccine.

The Operation Warp Speed team said its policy was to deal with a number of manufacturers of vaccines.

Some in the US media said the executive order reflected concern that supplies might not be enough.

Where is the US with vaccination?
US regulators on Tuesday confirmed the Pfizer/BioNTech Covid vaccine was 95% effective, paving the way for it to be approved for emergency use.

The Food and Drug Administration (FDA) found no safety concerns to stop approval of the vaccine and meets on Thursday to make a formal decision.

Although two doses are needed to offer full protection, the first jab prevented 89% of the most severe cases.

Some side-effects such as redness or swelling at the injection site, short-term fatigue, headaches and muscle-pain were reported but were considered mild.

US biotech firm Moderna has reported similar successes with its vaccine and it is also expected to get FDA approval before Christmas.