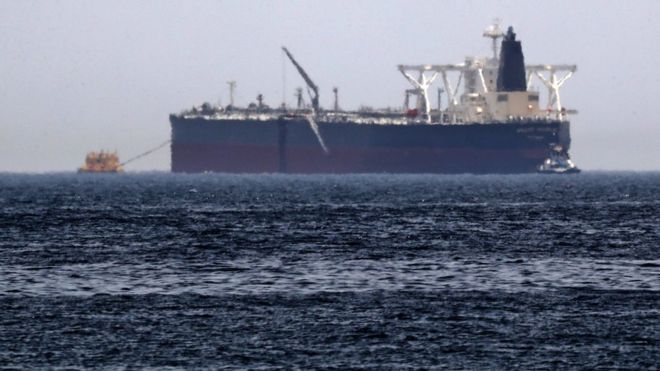 Four ships, including the Saudi vessel Amjad (pictured above), were sabotaged earlier this year
Shares

An explosion has caused a fire on an Iranian tanker near the coast of Saudi Arabia, Iranian media say.

The vessel, from Iran's national oil company (NOIC), was 60 miles (97km) from the Saudi port city of Jeddah when the incident took place, reports said.

The ship's two main storage tanks were said to be damaged, causing an oil spill into the Red Sea, but no-one was injured.

NOIC claimed the vessel was hit by missiles but did not provide evidence.

Iran's national tanker company (NITC) said the fire had been put out and the oil spillage reduced to a minimum, according to the news site Iran Front Page.

Iranian state TV identified the ship as the oil tanker Sinopa. The maritime vessel tracking firm Tanker Trackers said the tanker was regularly used to ferry oil to the Syrian government, despite international sanctions.
The incident came amid heightened tension between Iran and Saudi Arabia.

And US officials said Iran was responsible for attacks on two oil tankers in the Gulf in June and July, as well as attacks on another four tankers in May.

Iran denied involvement in all the incidents.