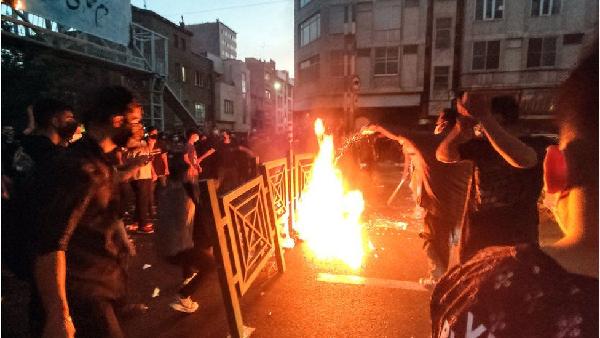 Widespread protests have been sparked by the death of a woman in policy custody.
Shares

The US says it will ease internet curbs on Iran to counter Tehran's clampdown on protests which were sparked by a woman's death in police custody.

"We are going to help make sure the Iranian people are not kept isolated and in the dark," said US Secretary of State Anthony Blinken.

The relaxation of software controls will allow American tech firms to expand their business in Iran.

At least 35 people have been killed in the worst unrest in Iran for years.

Officers reportedly beat Ms Amini's head with a baton and banged her head against one of their vehicles. The police have said there is no evidence of any mistreatment and that she suffered "sudden heart failure".

Anti-government protests continued for an eight straight night on Friday, while pro-regime rallies also took place in Tehran and other cities.

Mr Blinken said the partial relaxation of internet restrictions was a "concrete step to provide meaningful support to Iranians demanding that their basic rights be respected". It was clear, he added, that the Iranian government was "afraid of its own people".

The US treasury said the move would help counter the Iranian government's attempt to "surveil and censor" its people.

But it is unlikely to have an immediate impact as it "does not remove every tool of communications repression".

Billionaire Elon Musk said on Twitter that he would activate his satellite internet firm, Starlink, to provide internet services to Iran in response to Mr Blinken's announcement.

Starlink provides internet services via a huge network of satellites and is aimed at people who live in remote areas who cannot get high-speed internet.

US officials said that the updated license did not cover hardware supplied by Mr Musk but his firm and others were welcome to apply for permission to the treasury.

Footage shared on social media on Friday showed large crowds of protesters gather in several Tehran neighbourhoods after dark, while other incidents occurred elsewhere the country. In the protests women have defiantly taken off their hijabs and burned them, or cut off their hair in front of cheering crowds.

While spreading across much of the country, many of the early protests were concentrated in western Iran, particularly areas with large Kurdish populations, the group Ms Amini belonged to.

On Friday, reports emerged from Oshnavieh, in Iran's West Azerbaijan Province, which borders Kurdistan, showing widespread protests, as well as suggestions demonstrators had taken control of large parts of the city. The BBC was unable to confirm this.

Videos posted from Oshnavieh showed large crowds of people marching through city streets with no police presence, while loud explosions could be heard.

Friday also saw pro-regime demonstrations in Tehran and other cities, with those present declaring support for Supreme Leader Ayatollah Ali Khamenei, who has been a target of anti-government protesters.

President Ebrahim Raisi spoke at a pro-government event, saying he would not allow the country's security to be "threatened".

"We will not allow people's security to be put at risk under any circumstances," he said, shortly after returning from the United Nations General Assembly in New York.

Stressing that Iran's "enemies" wanted to exploit the unrest, Mr Raisi said the government would listen to criticism over Ms Amini's death, but would not be influenced by "rioting".