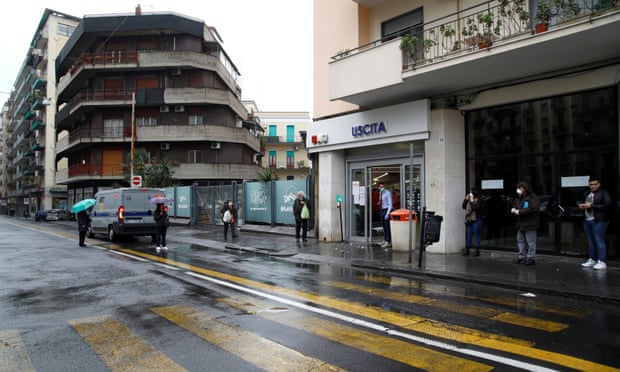 As Italy struggles to pull its economy through the coronavirus crisis, the Mafia is gaining local support by distributing free food to poor families in quarantine who have run out of cash, authorities have warned.

In recent weeks, videos have surfaced of known Mafia gangs delivering essential goods to Italians hit hard by the coronavirus emergency across the poorest southern regions of Campania, Calabria, Sicily and Puglia, as tensions rise across the country.

â€œFor over a month, shops, cafÃ©s, restaurants and pubs have been closed,â€ Nicola Gratteri, antimafia investigator and head of the prosecutorâ€™s office in Catanzaro, told the Guardian. â€œMillions of people work in the grey economy, which means that they havenâ€™t received any income in more than a month and have no idea when they might return to work. The government is issuing so-called shopping vouchers to support people. If the state doesnâ€™t step in soon to help these families, the mafia will provide its services, imposing their control over peopleâ€™s lives.â€

The ramifications of the lockdown in Italy are affecting the estimated 3.3 million people in Italy who work off the books. Of those, more than 1 million live in the south, according to the most recent figures from CGIA Mestre, a Venice-based small business association. There have been reports of small shop owners being pressured to give food for free, while police are patrolling supermarkets in some areas to stop thefts. Videos of people in Sicily protesting against the governmentâ€™s stalled response, or people beating their fists outside banks in Bari for a â‚¬50 (Â£44) loan are going viral and throwing fuel on the crisis; a fire the mafia is more than willing to stoke.

From the first signals of mounting social unrest, the Italian minister of the interior, Luciana Lamorgese, said â€˜â€˜the mafia could take advantage of the rising poverty, swooping in to recruit people to its organisationâ€™â€™. Or simply stepping in to distribute free food parcels of pasta, water, flour and milk.

In recent days, the police in Naples have intensified their presence in the poorest quarters of the city, where men tied to the Camorra, the Neapolitan mafia, have organised home delivery of food parcels. Magistrates have already begun an investigation against a group of people who were questioned while distributing food to local residents.

In Palermo, according to La Repubblica, the brother of a Cosa Nostra boss allegedly distributed food to the poor in the Zen neighbourhood, an area with an established mafia presence. When the news broke, the man defended himself on Facebook, claiming that he was only doing charitable work and attacking the journalist who first reported the news.

â€œMafias are not just criminal organisations,â€™â€™ Federico Varese, professor of criminology at the University of Oxford, said. â€œThey are organisations that aspire to govern territories and markets. Commentators often focus on the financial aspect of mafias but they tend to forget that their strength comes from having a local base from which to operate.â€

The question of distributing food parcels is a tactic as old as the mafia itself, where in the south of Italy bosses have customarily presented themselves to the people as benefactors and local power brokers, initially without asking for anything in return.

â€œMafia bosses consider their cities as their own fiefdom,â€ Gratteri said. â€œThe bosses know very well that in order to govern, they need to take care of the people in their territory. And they do it by exploiting the situation to their advantage. In the peopleâ€™s eyes, a boss who knocks on the door offering free food is a hero. And the boss knows that he can then count on the support of these families when necessary, when, for example, the mafia sponsors a politician for election who will further their criminal interests.â€

Dozens of investigations in the south have led to the arrests of politicians who have aided and abetted the mafia, and who were elected with the support of local Mafiosi who forced citizens to vote for them in exchange for services, such as a simple food parcel.

Varese said: â€œThese handouts by the mafias are not gifts. The mafia does not do anything out of its kind heart. They are favours that everyone will have to pay back in some form or another, by aiding and abetting a fugitive, holding a gun, dealing drugs and the like.â€

â€œConsider what happened to El Chapo, the Mexican narco,â€ said Gratteri. â€œHe trafficked tons of cocaine and commissioned the murder of hundreds of people but in his hometown he was known for his benevolence, because people said that he provided medicines to families or built roads. The same thing happens here.â€

This week, Itayâ€™s antimafia prosecutorâ€™s office said bosses would offer their virtually endless criminal capital to businesses in need, and then swallow them up. Then, they will use those businesses for money laundering profits from the criminal activities.

Varese said: â€œThe mafias might be able to benefit in other ways from the current lockdown and especially from the future, when Italians will all be able to return to work, spend more money, and get the economy on its feet again. But surely the story exemplified by the handouts of food parcels in Palermo and Naples shows their true nature, and it tells why they are so dangerous.â€