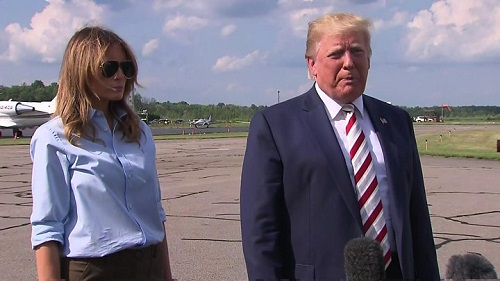 President Donald Trump's impeachment angst led him to fire off a new attack on a key witness and threatens to deepen in the frenetic week ahead with crucial testimony scheduled from officials caught in the middle of the Ukraine storm.

But as is perpetually the case with the President, a brew of competing scandals and controversies will jostle for attention in Washington. That includes fallout from a mysterious and unscheduled trip to a hospital on Saturday, his fight against efforts to reveal his tax records and an apparent new tactic -- firing off searing attacks on witnesses who criticize him in televised hearings.

The President opened a window into the state of his mind Sunday when he lashed out against Jennifer Williams, an aide to Vice President Mike Pence, who described his July 25 call with Ukrainian President Volodymyr Zelensky in her deposition as "inappropriate."

An appearance on Wednesday from Gordon Sondland, the US envoy to the European Union, could prove to be the most pivotal moment so far of the inquiry into whether Trump abused his power.

The former GOP donor is emerging as Trump's top point of contact with Ukranian officials as the President pushed for an investigation into former Vice President Joe Biden, a possible 2020 rival.

Other witnesses have testified that Sondland had a direct line to the President and as saying that the only thing Trump cared about in relations with Ukraine was his own political advantage.

That leaves Sondland facing a dilemma -- does he seek to protect the President when he testifies under oath or can he mitigate his own exposure? He may not be able to do both.

But Sondland is not the only witness with the capacity to damage the President's case this week. At least eight current and former officials are expected to testify in a dramatic week of televised hearings that are likely to infuriate Trump and may tie him more directly to the scheme to go around official US foreign policy channels to heap pressure on Ukraine.

Trump blasted Williams in a tweet as part of a band of "Never Trumpers, who I don't know & mostly never even heard of." Pence's office pointedly declined to defend Williams -- with a spokeswoman apparently seeking to downplay her importance to the Vice President by saying she was a staffer on assignment from the State Department.

The President's attack may be an attempt to discredit public testimony from Williams due on Tuesday when she is scheduled to appear alongside Lt. Col. Alexander Vindman, a senior National Security Council official who has also criticized Trump.

Trump's assault follows his attack on former US ambassador to the Ukraine Marie Yovanovitch during her testimony at a televised hearing on Friday in a tweet that sparked a debate over whether he was guilty of witness tampering -- with some Democrats suggesting the episode could be folded into articles of impeachment.

This 'is not OK'
The building sense of crisis was reflected in comments by one of the President's top Republican defenders, Rep. Mike Turner of Ohio on Sunday.

"As I've said from the beginning, this is not okay," Turner told CNN's Jake Tapper on "State of the Union."

"The President of the United States shouldn't even in the original phone call be on the phone with the president of another country and raise his political opponent."

Still, Turner argued that there was no "quid pro quo" or smoking gun that should lead to the President being removed from office. His comments reflect the uncomfortable spot Republicans find themselves facing as more and more evidence contradicts the White House claim that nothing underhand took place.

Trump has already warned his party not to adopt a face-saving approach in which lawmakers could criticize his behavior but argue that it does not meet the constitutional standard for impeachment.

There is so far no sign of Trump's Republican firewall crumbling in the Democratic-led House -- which is expected to vote to impeach before the end of the year, or the Senate where a two-thirds majority would be needed to convict him and oust him from office after an impeachment trial.

But the political price that Republicans may pay for saving the President -- especially among vulnerable GOP senators up for reelection next year appears to be rising.

Trump's defense was further undermined by the latest witness testimony released over the weekend that appeared to show him more closely tied to the center of the scheme to pressure Ukraine.

This followed a grim week in which several State Department veterans painted a picture of a rogue operation that trashed long-time US national interests to serve Trump's political goals.

Roger Stone, the President's friend, was meanwhile convicted of lying to Congress, apparently in an effort to protect the President from embarrassment in a case linked to then-special counsel Robert Mueller's investigation.

And an unscheduled visit by the President to Walter Reed on Saturday sparked new intrigue and doubts over whether his staff was being truthful about his condition. White House spokeswoman Stephanie Grisham said the President was in good health and went for a routine check-up.

Just 'Never Trumpers'?
An emerging line of defense for the President is that anyone critical of his conduct is simply a disaffected bureaucrat who never accepted him as President.

"There are a lot of people who worked in the Trump administration who have very countering views to that and they've not been allowed to come forward," Scalise said.

But while the White House is targeting foreign service and current and former National Security Council staff who have testified, Trump has not allowed senior political staff -- including acting Chief of Staff Mick Mulvaney -- to testify.

Democrats want to question Mulvaney over why the military aid to Ukraine was delayed at a point when Trump was leaning on the country's new government to investigate Biden.

Democrats on Sunday sought to turn up the heat on the President by arguing that he could clear up any questions and complaints about the process by appearing on Capitol Hill himself.

As they grasped for anything that could improve their case, Republicans highlighted reported comments from Ukraine's foreign minister that the administration did not tell Kiev that there was a link between nearly $400 million in delayed US aid and the need to open an investigation into Biden.

But Democratic Sen. Chris Murphy of Connecticut told CNN that the Ukrainians -- locked in a desperate battle with Russian-backed separatists -- had an incentive to play down US pressure.

"The Ukrainians are always going to try to put a spin on this," Murphy said on "State of the Union."

"They won't accuse the President of extortion. They are presently reliant on the goodwill of Trump in order to keep their country safe."

The notion that the Trump team did not spell out a "quid pro quo" on military aid is undermined by a deposition, released Saturday, by Tim Morrison, a senior National Security Council official.

Morrison said he witnessed a conversation between Sondland and senior Ukrainian official Andriy Yermak in Poland.

He said the US envoy to the European Union told him that he suggested to the Ukrainians that military aid could be freed up if the Ukrainian prosecutor general went to a microphone and announced an investigation into Burisma, the energy giant on which Biden's son Hunter served as a board member. There is no evidence of wrongdoing by the Bidens.

This and other revelations help explain why the appearance by Sondland will be so crucial.

On Friday, diplomatic aide David Holmes testified behind closed doors that he overheard a phone call in which Trump asked Sondland whether the Kiev government would open investigations he asked for the day before in his now notorious call with his Ukrainian counterpart.

Sondland told Trump that Ukrainian President Vlodymyr Zelensky "loves your ass" and that Ukraine was going to move forward with the probe Trump had asked for, according to a copy of an opening statement delivered by Holmes and obtained by CNN.