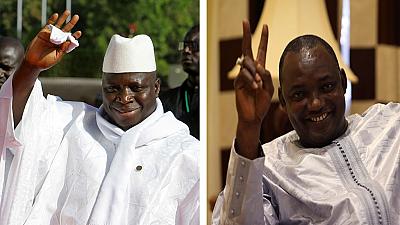 The Gambia's President-elect, Adama Barrow, has told the BBC he will declare himself president on 18 January despite incumbent Yahya Jammeh's rejection of the election result.

He said his team was preparing for his inauguration and he urged Mr Jammeh to respect the will of the electorate.
The election commission declared Mr Barrow winner of the 1 December poll.
Mr Jammeh has launched court action to annul the result after initially accepting defeat.

His security forces have seized control of the election commission's headquarters in the capital, Banjul.
The Gambia has not had a smooth transfer of power since independence from Britain in 1965.

Mr Jammeh first seized power in a coup in 1994, and many of his critics have been jailed or forced into exile.
Mr Barrow, a property developer who was the candidate of a coalition of seven opposition parties, defeated him by four percentage points.
In the interview with the BBC's Umaru Fofana, Mr Barrow said Mr Jammeh's move to annul the election had come as a surprise.

Mr Jammeh had phoned to congratulate him soon after the election and had stated that "our system is the best" and "nobody can rig" the elections, Mr Barrow said.
He ruled out a recount or re-run of the election: "We are not supporting anything as at now. Our position is very very clear. I'm president-elect. We advise the president to cooperate."
Asked about his inauguration, Mr Barrow said: "We have a team that is working on our inauguration. We are working on it; on the 18th, I'm the legal president of this country."

Mr Barrow told the BBC Mr Jammeh would not be prosecuted if he stepped down because his government would focus on "truth and reconciliation".
Mr Jammeh "should feel secure" because "he is a Gambian", Mr Barrow added.
"If South Africa can reconcile [after the racial system of apartheid ended in 1994], I see no reason why Gambians cannot reconcile. We are not saying prosecution; we said truth and reconciliation."
Mr Barrow added that he feared for his safety but had the "support of the whole world".
"That puts me in a strong position and I'm a very strong character. I have faith in God."
Mr Barrow rejected suggestions that foreign troops should intervene to help him take power.

According to the electoral commission's final count:
Mr Barrow won 222,708 votes (43.3%)
President Jammeh took 208,487 (39.6%)
A third-party candidate, Mama Kandeh, won 89,768 (17.1%)
Results were revised by the electoral commission on 5 December, when it emerged that the ballots for one area had been added incorrectly, swelling Mr Barrow's vote.