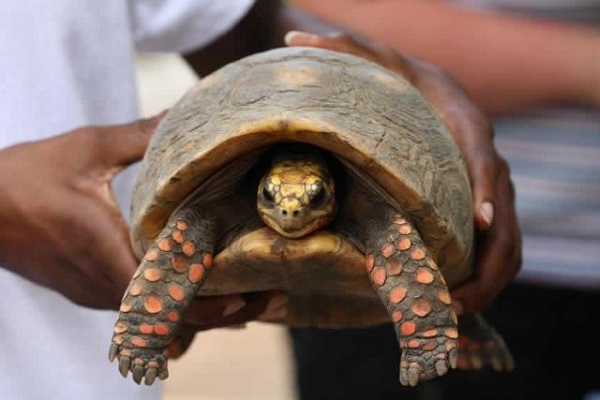 It's no secret that tortoises are among the most resilient animals on Earth, perfectly adapted for life in natural environments that others would find inhospitable.

But for one particularly tenacious pet tortoise, that hardy sense of survival allowed it to endure for decades in the most unnatural of places, according to reports.

Back in 1982, the Almeida Family was saddened to learn that their beloved pet, Manuela, a young red-footed tortoise, had gone missing.

Their house was under renovation at the time, so the family just assumed that the slow-moving animal had slipped out through a gate left open by the construction crew -- disappearing into the forest near their home in Realengo, Brazil.

But they couldn't have been more wrong.

The true fate of their lost pet remained a mystery for the next 30 years, that is until they were met with an unexpected surprise.

After their father Leonel passed away, the Almeida children returned to help clean out his cluttered storage room upstairs. As it turns out, Leonel was somewhat of a hoarder, so the room was jam-packed with things that he had found on the street, like broken televisions and furniture. Deciding it was mostly junk, the family set about moving it to the trash out front.

But while son Leandro Almeida was making a trip to the dumpster with a box of broken records, a neighbour asked him if he was intending to throw out the tortoise that was holed up inside.

"At that moment I was white and did not believe," Leandro told Globo TV.

That's when the Almeidas learned that, amazingly, the turtle had managed to somehow survive for three decades.

The family suspects she had been able to sustain herself grubbing on termites which, thanks to all that unwanted furniture, were likely in abundance. And although she seemed to be surviving just fine in the confines of the storage room, Manuela is no doubt pleased (in her own tortoisey way) to be reunited with the family that had so long thought her gone forever.

But in the end, it's hard not to be impressed with the resiliency of life and the slow-and-steady approach to survival taken by tortoises -- both in living with us and perhaps sometimes in spite of it.