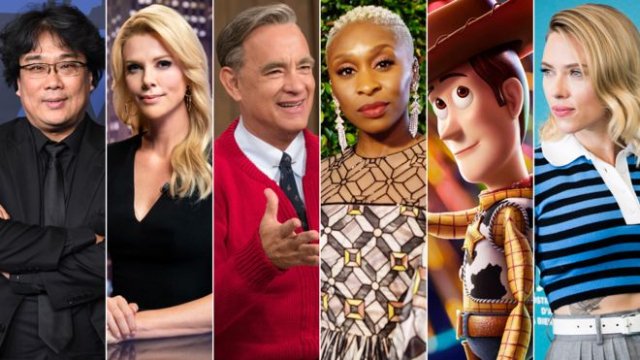 The short gap between the Baftas and the Oscars this year has barely left Joaquin Phoenix enough time to wash his multi-use tux.

The Joker star is just one Hollywood actor currently hot-footing it from London to Los Angeles in time for the Academy Awards on Sunday.

This year's ceremony is being held earlier than usual in an attempt to combat falling ratings. The slew of other awards ceremonies over several months was thought to be damaging interest in the Oscars, which mark the conclusion of awards season.

Oscar-ologists have been closely studying the nominations list for trends, patterns, quirks and clues about who might win what.

1. Scarlett Johansson has joined a rather exclusive club.

She is only the 12th person to receive two acting nominations in the same year.

Johansson is nominated for both best actress and best supporting actress for her performances in Marriage Story and Jojo Rabbit respectively.

But none has ever won in both their categories.

2. It's been 15 years since the winner of best actress and best picture were in sync.

That's unlikely to change this year.

Renée Zellweger is the favourite to win best actress for Judy, which isn't even nominated for best picture.

3. Cynthia Erivo could end up with a massive EGOT.

In fact, if the Harriet star wins an Oscar to go with her Emmy, Grammy and Tony awards she'll become the youngest EGOT winner in history. 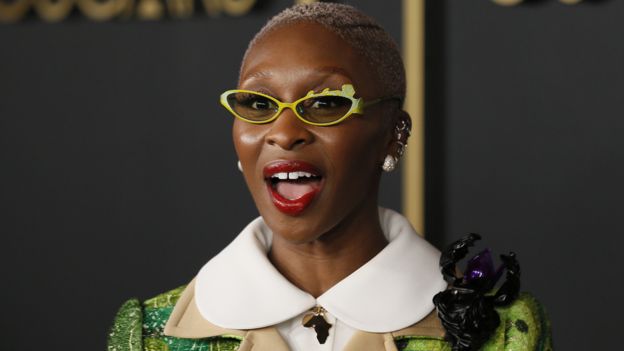 The 33-year-old would take over from the current record holder Robert Lopez, who completed the quad in 2018 at the age of 39.

Erivo has two chances to do this on Oscars night - because she's nominated for both best actress and best original song (she co-wrote Harriet's anthemic original song Stand Up.)

The newly-knighted Sir Sam first won in 1999 for American Beauty, but could triumph again at the 2020 ceremony with his hugely successful World War One epic 1917.

Before now, Billy Wilder recorded the biggest gap, winning his two best director trophies 15 years apart for The Lost Weekend (1945) and The Apartment (1960).

5. There's a competing couple in the best picture category.

Directors Greta Gerwig and Noah Baumbach, who began dating in 2011 and have a child together, are up against each other for the top prize.

Gerwig's nomination for Little Women and Baumbach's for Marriage Story make them the first director-couple to go head-to-head for best picture. 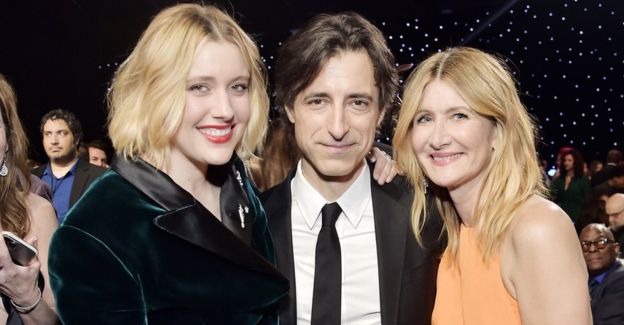 This almost happened in 2009, when James Cameron and Kathryn Bigelow both had films nominated - but they had divorced some 18 years earlier.

Gerwig and Baumbach are nominated in slightly different categories for writing (best-adapted screenplay and original screenplay respectively), so at least that slightly eases the tension over the dishwasher.

Coincidentally, both their films star, Laura Dern, is nominated for best supporting actress.

6. Having said that, Little Women and Marriage Story are both long shots for the top prize.

That's partly because it's unusual for a film to win best picture without a nomination for best director, which neither Gerwig nor Baumbach have.

It's not impossible, however.

Last year, Green Book triumphed without a director nod for Peter Farrelly. Prior to that, 2013's Argo was the last to win without a nomination for its director Ben Affleck.

7. Toy Story 4 could better the Oscars record it set with Toy Story 3.

The prize for best-animated feature was introduced in 2001, and since then only one sequel - Toy Story 3 - has won.

So a victory for Toy Story 4 would make it not just the second sequel to win best-animated feature, but the second to win within its own film series.

8. Parasite has already broken a record and it could break another if it wins.

It's the first Korean film to receive a best picture nomination, and only the sixth film to be nominated for both best picture and international feature film.

9. Jonathan Pryce brings a dose of reality to best actor.

The Two Popes star is the only nominee in the category who plays a real-life figure - Pope Francis. 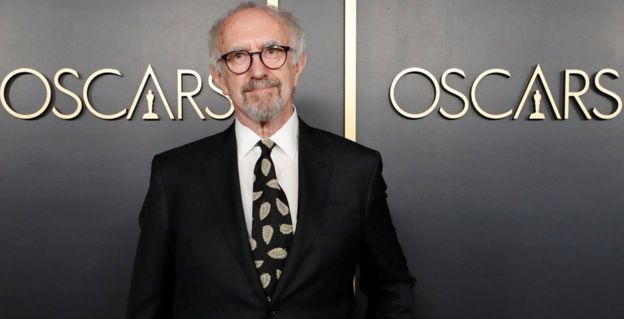 (Admittedly, Pedro Almodóvar weaved some of his own experiences into the film director character played by Banderas in Pain & Glory.)

Two of this year's awards season hopefuls were based on single magazine articles.

A Beautiful Day in the Neighborhood was inspired by a 1998 feature in Esquire magazine by journalist Tom Junod, who wrote a profile interview with the children's entertainer Fred Rogers.

Hustlers, meanwhile, was based on a 2015 investigation in New York magazine by Jessica Pressler. 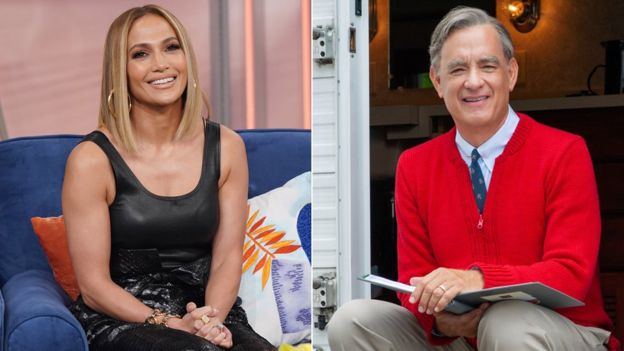 Despite both films being nominated across awards season, including at the Golden Globes, sadly only Beautiful Day registered on the Academy's radar.

Jennifer Lopez will have to rely on a future film to score her first Oscar nomination.

11. The average age of the supporting actor nominees is 71.

That's considerably older this year than the average age of all previous winners in this category - which is 49.

Having been around a while, it's perhaps unsurprising that all five of these greedy guts already have an Oscar - Pitt's came as a producer on 12 Years A Slave while the others won for acting.

Oscar pundits keep a close eye on best film editing every year, because there's a strong correlation between being nominated in this category and ultimately winning best picture.

It's notable, therefore, that 1917's momentum for the top prize comes despite the lack of an editing nomination.

Only one film since 1980 has won best picture without a best film editing nod, which was 2014's Birdman.

Interestingly, Birdman and 1917 already share something in common - both films appear to have been shot in one continuous take. Neither actually were, which, ironically, shows how skilful the editing must have been.

13. Ford v Ferrari is the first motor racing film to get a best picture nomination.

This might not sound particularly interesting, but there's a surprisingly large number of racing films which have missed out in the past - such as Rush, Grand Prix and Days of Thunder.

Senna wouldn't have been eligible for best picture as it would have been in for best documentary, but it wasn't even nominated for that.

Ford v Ferrari (which is titled Le Mans '66 in some countries) is nominated but is highly unlikely to win.

14. Netflix their doubled their chances of winning the best picture this year.

The streaming service pinned all its hopes (and money) on Roma in 2019, campaigning hard for the best picture win which eventually went to Green Book.

They fielded far more films for awards season this year, such as The King, Dolemite Is My Name, The Two Popes and The Laundromat (a film about which the less said the better). 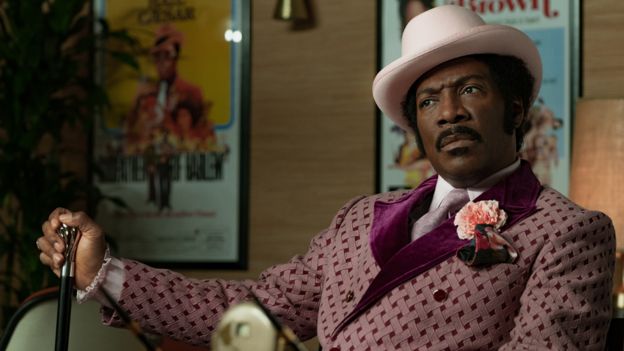 Dolemite Is My Name, starring Eddie Murphy, was one of Netflix's big hopes this year (NETFLIX)

However, two of their films in particular, The Irishman and Marriage Story, are nominated for the top prize.

It may well be that the Academy is still not ready to allow a streaming service to win best picture. But if any Netflix title can win them over, you'd think it'd be a Martin Scorsese gangster film starring Robert De Niro, Al Pacino and Joe Pesci.

15. Neither of the two favourites for best picture has nominations in the acting categories.

This may be down to Parasite being perceived as a film with an ensemble cast, where no performance is easily singled out for a leading actor category. The absence of 1917 in the acting categories is perhaps more surprising as George MacKay appears in the entire film.

16. Songwriter Dianne Warren's nod in best original song (for I'm Standing With You from the film Breakthrough) is her 11th Oscar nomination.

Her others include LeAnn Rimes's How Do I Live (from Con Air), Aerosmith's I Don't Want to Miss a Thing (from Armageddon) and Faith Hill's There You'll Be (from Pearl Harbor).

But, as we said last year, she has still never actually won.

In fact, she is now the most Oscar-nominated woman without a win in history, which keeps the heat off Glenn Close a little longer.

Sir Elton John's nomination in this category comes 25 years after he won it for Can You Feel The Love Tonight? from The Lion King. 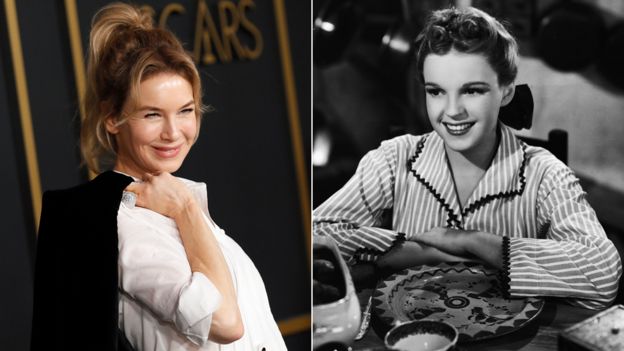 17. Judy Garland never won an Oscar. But she was supposed to.

She was widely expected to win for 1954's A Star is Born, and even had cameras set up around her hospital bed (she had just given birth) to capture her speech.

Grace Kelly won instead for The Country Girl - one of the biggest upsets in Oscars history.

The cameramen rapidly dismounted the equipment around Garland and left.

So if Renée Zellweger does win best actress, at least that will indirectly mark some form of (late) Academy recognition for Garland, more than five decades after she died.