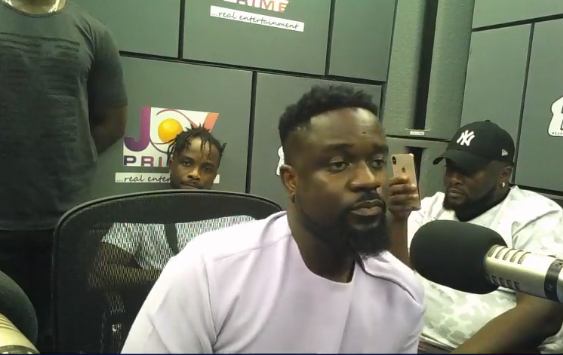 Award-winning rapper Sarkodie has disclosed that unlike many other celebrities and public figures who have a lot of problems with men of God prophesizing about their life, he has no feeling of doubt about prophecies and it all depends on your stand with God.

Speaking to Franky5 on  ‘This Is Gospel’ radio show on Hitz FM, the Sarkodie revealed that he recently received a video of Eagle Prophet Prophesying about him that he is going to be a legend.

According to Sarkodie, he is always attracted to anything that comes with a positive vibe and as such he fully embraces the prophecy from the Founder and general overseer of God’s Crown Chapel, Prophet Reindolph Oduro Gyebi.

Franky5 asked Sarkodie if he is embracing the prophecy because it is a positive one and with a quick response, Sarkodie stated that there have been instances where some men of God had to tell his mother that he Sarkodie is going to die in 7 days, and how he always go on his knees to pray to God to get answers to some of the prophecies.

He also made it clear that he embraced prophecy and prayed on it because he believes in God.

Sarkodie further stated that prophecies are sometimes about the mind and how an individual will work on it. He explained this point with the example of many things his mum said that he will achieve in his career.

He told Franky5 that even though his mother is not a prophetess, all of those things have become a reality because he decided to work hard for them.