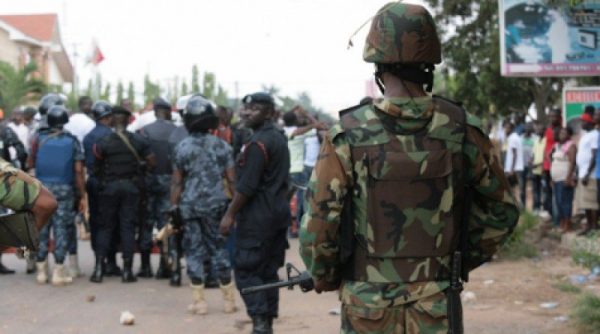 Some persons have been left injured after butchers in Ahinsan is the Ashanti Region clashed over who leads them.

The incident which occurred yesterday February 25, 2020, saw the military and police personnel intervene in the clash after a misunderstanding broke out over who should be crowned chief of the butchers.

READ ALSO:Â It will be difficult to stop actions of vigilantes in 2020 elections - Security expert warns

Even though police eventually restored calm there are reports of some persons sustaining various degrees of injuries.

The incident happened after a new chief butcher who was installed four months ago visited the slaughterhouse for the first time.

His opponents did not receive him warmly which resulted in an attack on him and his entourage.

The new chief butcher narrating the incident said: "I tried to come back here and visit my brothers so I start my normal work but when I got here, my opponents started throwing stones at me, hooting at me as if I am an animal and my car has been destroyed."

A Luv FM reporter who was at the scene to report the issue faced the same faith as the chief butcher as he also got injured.

They have both been granted bail but will report to the police as investigations continue.

Even though the place is now calm, the military and police have tightened surveillance.