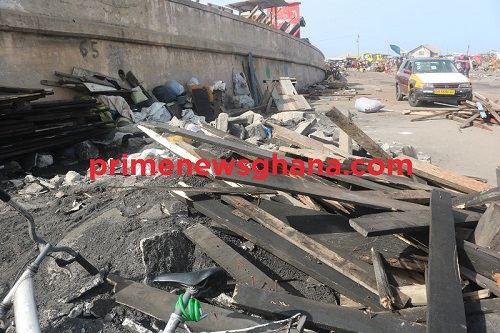 Residents of Jamestown said it is insensitive for the Accra Metropolitan Assembly, AMA to demolish their homes during this Covid-19 period.

Speaking to PrimeNews, the residents say they have been living there for about 20years.

They explained that they have their homes in some of these structures and the action of the AMA has rendered them homeless.

In an interview with PrimeNews earlier today, May 21 the PRO for AMA Gilbert Ankrah said where the demolishing exercise was carried out to pave for the construction of the Jamestown Fishing Harbor did not affect residential structures.

He stated that there is a compensation package for those who have been affected.

"Yes, there are plans to ensure that those who are affected are compensated. AMA's role to prepare the grounds and that is exactly what we are doing. This won't affect anybody, the place is not a residential area people don't stay there is it a fishing community so the fishermen just come there to do their business they all have their various homes. They go there and fish those illegal structures who see there are structures that just erected there and one way or the other some live there some do all sort of stuff there."

He added that they have enough community engagement for the project.

"The level of engagement has been good that is the main reason why issues of resistance are not being seen in this particular one because we've engaged them on several occasions the latest notice we gave was just last week prior to that as far back as 20th of April we went to write on their various structures..."

READ ALSO : AMA pulls down over 400 structures at Jamestown

But the residents disagree with the AMA saying some of them were born at the place they have been living there for their whole life.

According to some, it is even more difficult in this Covid-19 period that they are to observe social distancing.