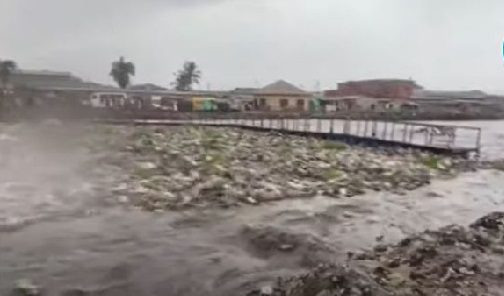 Mr Shaibu said they will not sit on the matter and have reported to the Chorkor police for them to commence investigations.

"It was a very solid bridge and if the people in the area appreciated the composition of the bridge they won't have messed it up. We have people on the grounds and information we are gathering which we have reported to the Chorkor Police is that some people contributed to the damaging of the bridge because they have made their own bridge which people use and they make money from it, it was a very strong bridge and we will take this matter up".

The floating bridge which was recently constructed by Member of Parliament for Ablekuma West Ursula Owusu to facilitate the easy movement of the people across the Chemu canal connecting Chorkor to Shiabu in Accra was washed away by the heavy downpour on Sunday, April 26.

She has visited the area since the collapse and alluded to the fact that some of the residents were seen jubilating about the collapse of the bridge and suspects that those operating tolled bridges over the Chemu canal and collecting 20 pesewas from residents for each crossing could have answers to the missing bridge not just the heavy downpour.

Mr Frank Ofori of River Restoration Limited who is an engineer of the said bridge said residents deliberately untied ropes anchoring the floating bridge which resulted in its collapse.

He said preliminary assessment done indicated that, â€œSome persons deliberately went and loosened the end rope anchoring the concrete cast, which made the bridge shift from its original location. The bridge is not broken,â€ he said.