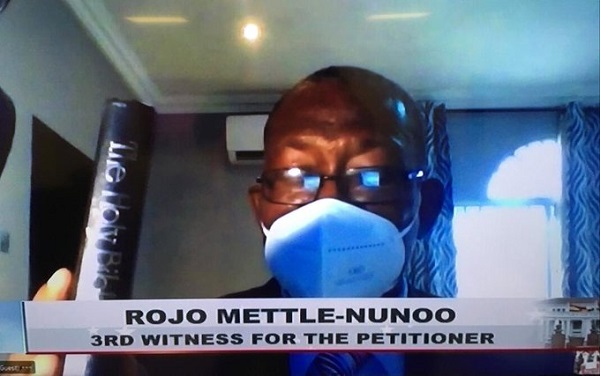 The Supreme Court on February 5, 2021, struck out five paragraphs from the witness statement of Rojo Mettle-Nunoo, one of the agents who represented John Mahama at the Electoral Commission’s National Collation Centre during the 2020 polls.

This leaves some 27 paragraphs out of the total 32 submitted by the witness.

At the hearing today, the seven Justices on the case gave the ruling following an objection raised by Akoto Ampaw, lead counsel for President Nana Addo Dankwa Akufo-Addo, the 2nd respondent.

Mr. Ampaw had argued that 23 paragraphs in Mettle-Nunoo’s 32-paragraph statement should be expunged because they were not based on the pleadings of the petitioner and also seeking to introduce a new case.

Mr. Justin Amenuvor who is also the lead counsel for the 1st respondent, associated himself with the objections raised by Mr. Ampaw.

However, the lead counsel for the petitioner, Mr. Tsatsu Tsikata opposed the objections raised.

He argued that Mr. Ampaw’s objections were baseless “and should be overruled” by the court.

The Supreme Court in a unanimous decision struck out paragraphs instead. They include paragraph 4, 5, 6, 7 and 18.