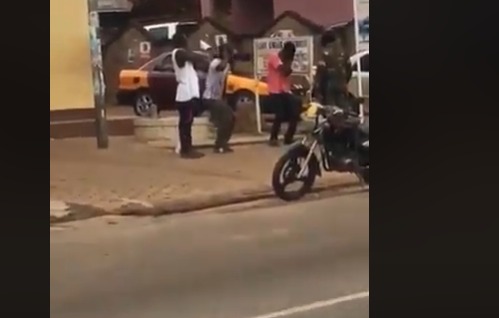 The Director of Public Relations of Ghana Armed Forces (GAF), Colonel Eric Aggrey Quarshie, has denied a viral video that shows a civilian hitting a military officer who was on lockdown duties.

The video which surfaced on social media was purported to have happened at Tafo in the Ashanti Region.

Col. Quarshie on Asempa FM's Ekosii Sen says this is an old video and has no relation to the lockdown operations being carried out by military and police personnel currently.

â€œThe video is not linked to lockdown operation at all; it is old. It happened last year,â€

The Ghana Armed Forces have withdrawn some soldiers seen maltreating civilians in viral videos from the Operation COVID Safety.

Below is the video

"I want to emphasize on some videos going viral concerning some brutalities being meted out by soldiers to some civilians, let me assure Ghanaians that the soldiers that you have are well trained and professionals they don't brutalise."

"We have had one incident and that has nothing to do with slapping, it is something we thought off as not being up to our standard and we are dealing with it, that soldier involved has been withdrawn from the operation back to the barracks.