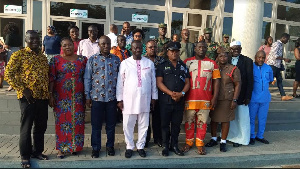 According to the Director-General of NADMO, the National Disaster Management Organization was established by an Act of Parliament, Act 517 in the year 1996.

Twenty years after its establishment, a new law was passed, 2016(Act 927) to give the Organization more responsibilities and resources to carry out its mandates which include but not limited to the following,

-Be responsible for the implementation of Government policy on disaster prevention, disaster risk reduction, and climate risk management.

-Identify, map up hazards and monitor the hazards.

-Collaborate with communities and relevant institutions through the dissemination of information to educate the public.

-And to facilitate the development of communities and community-based organizations.

The Director-General, Regional Director and the District or Municipal Directors of NADMO are the secretaries to the committees.

Nana Agyemang Prempeh commended President Akufo -Addo for resourcing NADMO with additional funds through the common Fund, which has historically ensured timely transfer of funds to the regional and district offices to enhance their work.

“As part of my vision to reposition NADMO, I have introduced a program by name ‘Catch them young’.

This is to introduce disaster prevention by way of establishing disaster clubs within the tertiary, secondary and primary school levels.

The pilot program has been successful and very soon it would be launched in full scale. Additionally, we are also engaging the Ghana Education Service to put disaster prevention in the curriculum as a subject to be taught in schools”, he disclosed.

He also revealed that Vehicles and Motor Bicycles are ready at their warehouse for distribution to enhance their movement in preparing and responding to a disaster.