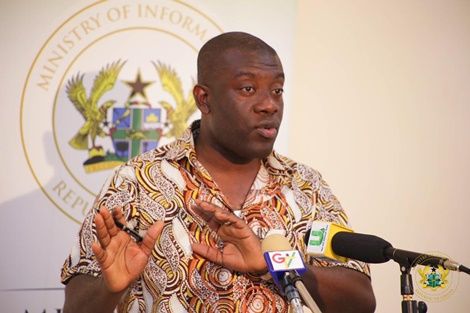 Minister for Information and Member of Parliament for Ofoase-Ayirebi Constituency in the Eastern RegionÂ Kojo Oppong Nkrumah has dared anyone who has alleged that he is involved in galamsey to provide evidence.

There have been some reports alleging that Mr Oppong Nkrumah is involved in the act and is also shielding some other bigwigs who are also doing illegal mining in the Eastern Region.

He has denied the claims and has dared individuals who are spreading these rumours to provide evidence to back their claims or desist from the action.

"The President is committed to fighting galamsey and that is why he said he has put his presidency on the line, we are all going to help bring an end to this menace.

"Meanwhile there are a lot of speculations that I'm involved in galamsey. I know that Iâ€™m not involved. If you have any evidence, just bring it," he spoke on Joy FM's NewsFile

In the course of the week, Operation Vanguard the anti-galamsey operation task force arrested some five persons, three reported to be officials of National Democratic Congress (NDC) and the other two are with the New Patriotic Party (NPP).

The arrest was made at Apramanso in the Akwatia District of the Eastern Region.

Nana Yaw Boadu who is in charge of special monitoring and evacuation of Operation Vanguard told Joy News that they were able to retrieve some twenty excavators as well.

The issue of galamsey has become a national issue and the government says it has sped up preparations tackle the issue to bottom.