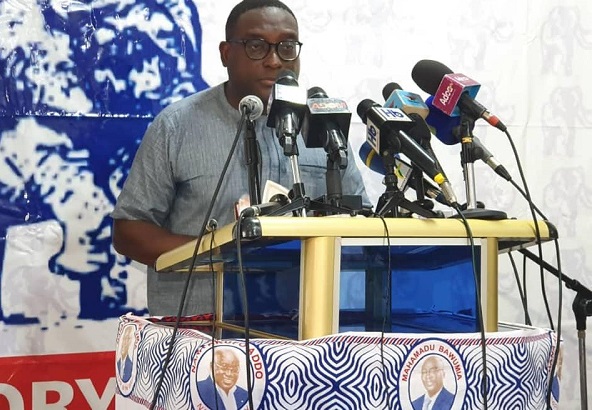 The New Patriotic Party (NPP) says the National Democratic Congress (NDC) should rather commend them for fighting illegal mining 'galamsey' because the latter did nothing about the menace when they were in power.

It will be recalled that the NDC recently held a press conference at the banks of the Twifo Praso river in the Central region, showcasing how galamsey activities have destroyed several water bodies in the country.

The NPP did not take that lightly and held a press conference today February 19, 2020, to respond to the NDC.

According to the party, galamsey, which largely affected water bodies under the Mahama administration, should not be politicized.

The NPP said the NDC and Mahama should rather commend the government for the bold decision to tackle the issue head-on instead of inciting Ghanaians against the government.

Speaking at a press conference in Accra, the director of communication of the NPP, Mr. Yaw Buaben Asamoa said Mr. Mahama should rather channel his energy into responding to allegations against him such as the Airbus bribery scandal among others instead of attacking the EC.

He said the NDC has been beating the war drums ahead of the elections but the NPP will not allow Ghana to burn under the watch of president Akufo-Addo come December 7, 2020.

The director of communication is, therefore, challenging the NDC and Mr Mahama to respond to key national issues rather than doing pick and choose which issues to discuss.

â€œFighting galamsey effectively is also a national security, peace and stability issue. The NPP is challenging John Mahama to justify the explosion in galamsey activities in his tenure, with two ministers giving up on the fight, one of them citing orders from above.

â€œWhilst the NDC have the right to pick and choose what they will talk about, it is only fair that they respond to issues of deep concern to the country if they genuinely seek to rule. They refuse to acknowledge the enhanced performance of the cedi, with international investment predicted to be the highest this early 2020.

READ ALSO: The 'galamsey' discussion should not be politicised - Suhuyini

â€œWe are confident that with the continued support of stakeholders, the road map will prove viable and effective at containing and transforming artisanal mining in Ghana,â€ Mr. Asamoa stressed.