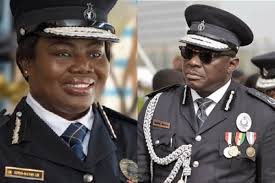 The Inspector-General of Police (IGP), David Asante-Apeatu, and the CID boss Maame Tiwaa Addo Danquah will today July 22 appear in court to respond to contempt charges against them over their refusal to comply with a bail order for Gregory Afoko.

Police refused to release Gregory Afoko, the alleged murderer of the former Upper East NPP chairman Adams Mahama despite a High Court order on March 20, 2019, directing that he should be released.

The IGP and the CID boss are being blamed for the police’s decision to set aside the court’s directive to release Gregory Afoko, causing the suspect to spend more than 120 days on remand.

The contempt of court charge against the two police chiefs was scheduled to be heard on July 3, 2019, but was adjourned to today, July 22, 2019.

The case was adjourned because the representatives of both the IGP and the CID boss had traveled out of the jurisdiction and hence could not be in court.

Justice Jennifer Dodoo, who is hearing this current case, had once issued an order for the police to produce Gregory Afoko to execute the bail.

Her decision on Monday will be one of two strands to the bail issue as an appeal filed by the Attorney-General, Gloria Akuffo, remains pending at the Court of Appeal.

The Parliament of Ghana will soon summon the Health Minister, Kwaku Agyemang…