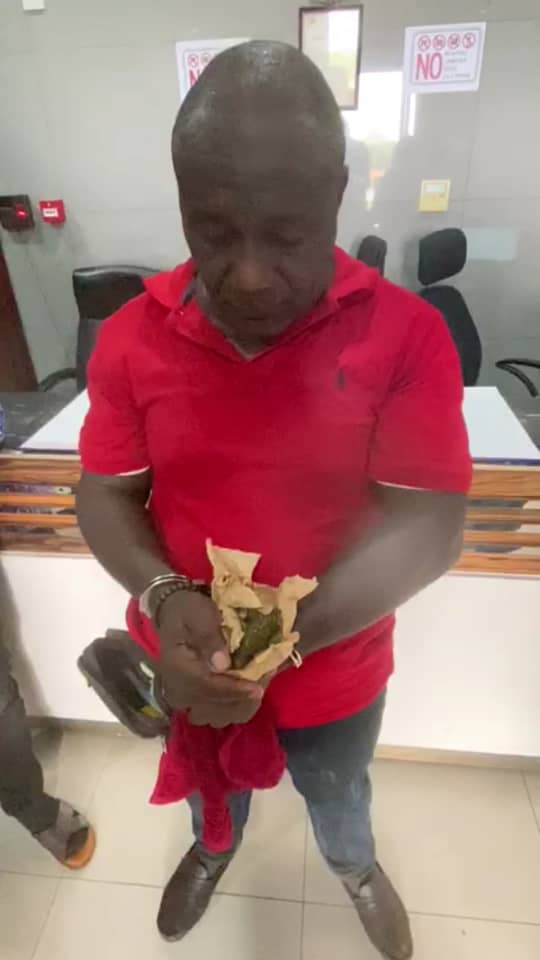 A self-proclaimed “man of God” whose video went viral threatening mayhem and the slaughter of the President and his clan has been arrested.

The 56-year-old “man of God” had in his possession, a big quantity of ‘Indian Hemp’ (weed) when he was arrested by a joint force made up of the CID and National Security at his residence near the Greda Estates on the Spintex Road in Accra Tuesday.

Kwabena Owusu Adjei, in a video, also threatened the EC boss Jean Mensa and heaped invective on the President and the people from Kyebi in an angry tirade.

Speaking to a small group of congregants, Owusu Adjei said “…. today as I hear the word blood flows, it is the blood of the Akyem Mafia that will flow”, alluding to the June 4 Revolution and the subsequent killing of high military command in the Region 1979 June 4 Uprising.

He is currently being processed for court.

The pastor referred to the overthrow of the president’s father, Edward Akufo-Addo who was president in 1970, and suggested a similar fate would happen to Nana Akufo-Addo.

“There are some people when you give them the power they cannot hold on to it and he is just like his father” he gesticulated violently.

“There is no way he can on to this power. God is my witness, hallelujah” Kwabena Owusu Adjei said to which an audience, of at least four, responded ‘amen’.

He also accused the president of a complicity in the death of an NPP MP J.B Danquah Jnr.

This is the second time in three months that the president has been threatened in a video posted online.

A private security guard has been arraigned after he called for the president’s beating. It was during the period when Accra and parts of the country was under lockdown amidst the coronavirus pandemic.

When the ‘pastor’ got to Jean Mensa, the so-called pastor worked up in a violent frenzy, stood up, beating his chest, screaming.

“If Jean Mensa thinks she was not born of a woman about come from some other angle and do another register, she should go ahead and do the new register” he fumed.

The Electoral Commission and the opposition National Democratic Congress have locked horns over plans to compile a new voter’s register.

All other political parties have taken sides with the governing New Patriotic Party supporting the EC’s plan.

After several demonstrations against the plan, the opposition NDC has taken the matter to court.

Ghana has barely six months to a general election and the new voter’s register is yet to be compiled.

Civil society groups, peace council and the national house of chiefs have tried to broker some agreement but to no avail.