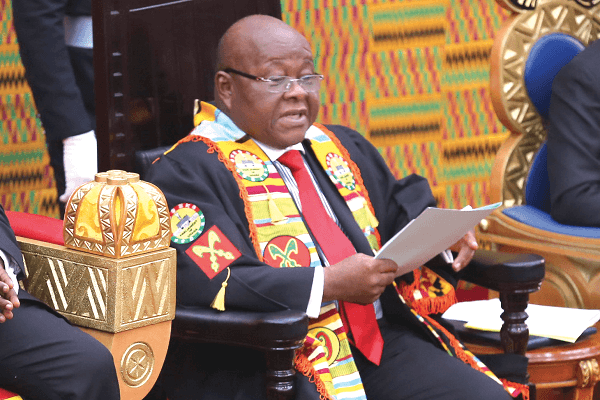 Speaker of Parliament, Mike Oquaye has summoned the Dean of Parliamentary Press Corps and the Director of Public Affairs of Parliament over the conduct of journalists at yesterday's sitting.

This follows a complaint from the majority leaders Osei Kyei Mensah Bonsu to the effect that journalists abandoned proceedings of the house to give audience to the MP for Ellembelle Emmanuel Armah Kofi Buah who had concerns about the energy sector aspect of the State of the Nation Address.

Speaking on the floor of the House the Speaker indicated that he will not hesitate to declare journalists as strangers to parliament if due coverage is not given to the proceeding of the House.

"It is forbidden if they have any doubt to abandoned the permission given them to cover proceeding in this honourable House and go outside the chamber itself and do some other work....... and I want to let the media know if that which was reported to have happened should happen anymore I will......on the fact that you are here as a guest......any, such act will make you unwelcomed guest..."

The Speaker further summoned theÂ dean of parliamentary press corps and the director of public affairs of parliament.

"After sitting I want to meet the head of the group as well as theÂ director of public affairs of parliament.."

The Minority in Parliament yesterday abstained from the debate on President Nana Akufo-Addoâ€™s State of the Nation Address.

This follows the opposition caucus also walking out of Parliament during the State of the Nation Address last week.

Even though the Minority MPs are present in the chamber of Parliament, Minority Chief Whip, Muntaka Mubarak, told the House, they have waived their right to second the motion for the debate and to participate fully.

â€œOur principle is that we are not participating in this. We will not be speaking to this,â€ Mr. Mubarak said on the Floor.