Techiman-Kintampo accident: One of the drivers was 'sleeping behind the wheel'- Reports 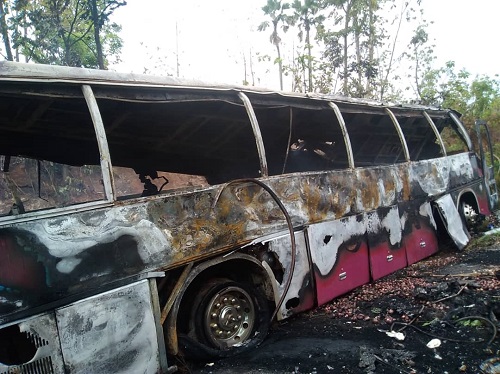 Techiman-Kintampo accident: One of the drivers was 'sleeping behind the wheel'- Reports
Shares

ACP Joseph Antwi Gyawu who is the Kintampo Divisional Police Commander says initial complains and reports so far suggest that one of the drivers involved in the Kintampo-Techiman accident was overspeeding whiles sleeping behind the wheel.

The accident happened last Friday, March 22, 2019, at Ampomakrom in the Kintampo South District of the Bono East Region and claimed over 60 lives.

"The initial complain and the indication so far shows that one of the drivers was overspeeding and sleeping that is why veered off the road and crashed with the bus coming from Accra to Bolga, but we are still investigating".

He added that some bodies have been identified and taken by families of the victims.

"20 bodies have been identified and 9 have been taken leaving 11," he told Joy News.

One of the survivors of the accident who were in the bus coming from Garu to Kumasi said they complained to the driver to slow down when he was overspeeding but he did not heed to their plea.

"I was returning to Accra from the North and the driver was speeding, we complained but he did not heed to our plea, I dozed off and then was awaken by the collision," one of the survivors said.

Meanwhile, the acting Minister for Bono East Region Evans Opoku Bobbie says the government will pay for the treatment cost of surviving victims involved in the Kintampo-Techiman accident.