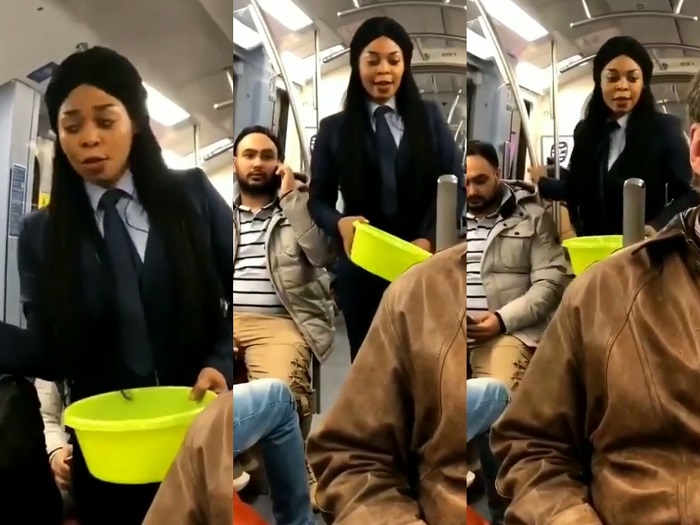 Controversial former AIDS Ambassador Joyce Dzidzor Mensah is seen in a viral video mocking the various fundraising ceremonies held both in Ghana and in Europe to help build a National Cathedral for the nation.

A video making the rounds on social media suggests that Ms Dzidzor Mensah, while onboard a train sought to solicit for funds from the passengers.

Speaking sarcastically to those aboard the train, Joyce Dzidzor explained that the country was in dire need of funds to put up a church building in order for God to come and live in.

In the video, she tried to draw the attention of Ghanaians to other challenging situations the country that needs to be attended to than building a National Cathedral.

Carrying a yellow bowl, Joyce Dzidzor moved from one passenger to the other urging them to make a donation starting from 100 euros before eventually dropping to 50.

President Akufo-Addo recently met with the Christian community in the diaspora to admonish them to support the construction of the National Cathedral financially. He was speaking as a special guest at the maiden fundraising ceremony for the cathedral in Washington DC, United States.

Despite several opposition views regarding the construction of a National Cathedral in the country, the President is convinced that when completed, the cathedral will not only serve as a rallying point for the Christian community to worship, pray and to promote deep national conversations on the role of faith in building Ghana but also an iconic national, regional and international infrastructure fit for pilgrimage and tourism.