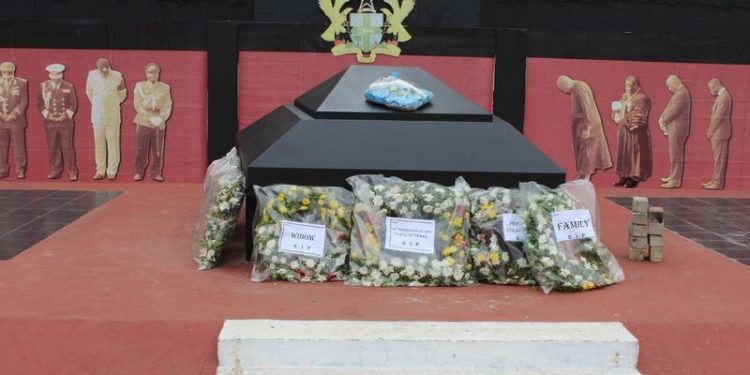 Brother of late President John Evans Atta Mills has accused the Atta Mills Institute and the Coastal Development Authority of tampering with the tomb of the ex-president without recourse to the family.

He added that the family does not recognize the act by the institute with regard to the remains of the late president at the Asomdwee Park. In a few days, 10 years after the passing of the late President will be marked.

Samuel Atta Mills, who is also the Member of Parliament for Komenda-Edina-Eguafo Abirem, has been addressing the press in Parliament.

“A group calling itself Atta Mills Institute that the family doesn’t even recognize, and Coastal Development Authority, have gone to break the grave of President John Evans Atta Mills. They have removed the tomb, and they claim that they are rebuilding it.”

There are reports that the park was no longer secure as its security had been left in a sorry state and no longer a secured place at least befitting enough for former leaders worth celebrating.

The condition of the park and the late President’s tomb is nothing to write home about, as some parts of the fencing protecting it have broken down.

“My question is that, we have a family tradition. Now that they have touched someone’s grave, is the body still in there? Who has the body? Why will you touch the body without informing the family head? Under whose authority? Why do they want us to always go through grief? This is a former president, why will the government allow this to happen? This is an insult to the family and the nation”, Samuel Atta-Mills added.

Professor John Evans Atta Mills previously served as Vice-President from 1997 to 2001 under President Jerry Rawlings, and he stood unsuccessfully in the 2000 and 2004 presidential elections as the candidate of the National Democratic Congress (NDC).

He is the first sitting Ghanaian head of state to die in office and was subsequently laid to rest at the Asomdwee Park.

John Evans Fiifi Atta Mills was a Ghanaian politician and legal scholar who served as President of Ghana from 2009 to 2012.